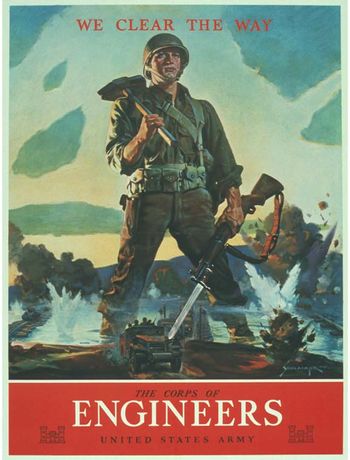 Attack of the 50-Foot Engineer
"Hey look, buddy, I'm an Engineer. That means I solve problems. Not problems like "what is beauty?", because that would fall within the purview of your conundrums of philosophy. I solve practical problems. For instance, how am I gonna stop some big mean mother hubbard from tearing me a structurally superfluous new behind? The answer: use a gun. And if that don't work? Use more gun. Like this heavy-caliber tripod-mounted little old number designed by me, built by me, and you best hope... not pointed at you."
— The Engineer, Team Fortress 2, Meet the Engineer

In war, equipment is an essential part of victory. From tents and rifles to bases and vehicles, no army can fight on manpower alone. They need tools, infrastructure, and people to build and maintain and move it. The average soldier actually does not have full knowledge of how his equipment works, let alone have the knowledge or time to maintain said equipment. Bigger and badder pieces of equipment require even more know-how and maintenance. There are also myriad obstacles, situations, and types of terrain and climate which a soldier cannot handle or even be equipped to handle on their own.

So, behind the glamorous officers and the rough-and-tumble enlisted soldiers, there's one man who will always be there to give them a technologically empowered hand: The Engineer.

The Engineer is the go-to guy for anything in this man's army. Just as The Medic takes care of anyone and their wellbeing, the Engineer takes care of their equipment to make sure that the Medic is needed as little as possible. He's also the one that constructs shelter and support machines like turrets and gun emplacements to give the infantry cover and a little extra oomph. Perhaps most importantly, the Engineer is usually the main mechanic, handling upkeep of vehicles.

The Engineer is rarely The Protagonist, since the frontline soldiers are the ones that usually get the spotlight. However, if the Engineer is in a story, he will always be an essential character, and you can expect his skills to be crucial for victory at some moment in the story. Engineer characters also usually tend to be older, more experienced soldiers who are a father figure to younger soldiers, be they frontline soldiers or younger engineers. They can also have elements of the drill sergeant, demanding constant effort and discipline from his crew, although this is not surprising considering the frontline soldiers depend on the equipment they service to survive. Younger engineers can have a tendency to be very passionate about their work, and have the gift of creativity and tenacity on their side. Expect young Engineers to come up with new technologies and strategies using existing technology that will give their allies a new edge in combat. Sometimes, an Engineer will get the spotlight on him.

If an Engineer decides or is forced to fight, expect it to be awesome. As it turns out, knowing how to build and fix machines and put structures together also gives you a wealth of knowledge in how to break them. Engineers are also the guys to call when terrain needs to be modified. From building roads to blasting obstacles, Engineers will clear the way. Combat Engineers and Sappers (explosives-oriented engineers) are a thing to behold: with their capacity to utterly destroy enemy equipment and fortifications and their specialized equipment, they can cause massive panic amongst enemy forces.

Engineers can also be... a little eccentric. Sometimes, they can show more caring for a piece of equipment than a human being. If they're particularly skilled with explosives, they may also be a bit too quick at suggesting them as a solution to any problem. They can also have, in more fantastic settings, a little bit of mad scientist tendencies, inventing and testing new technologies that may or may not make a difference.

In the UK and Commonwealth, the stereotypical engineer is a burly Brave Scot, a notion which has its roots in the early part of the Industrial Revolution when many educated Scots went south to escape endemic poverty and ended up working for the early railroads and factories, with many later returning to Scotland to found the 18th/19th century equivalent of a Silicon Valley startup. In Australia, a similar stereotype exists for New Zealanders, though the reasons for this aren't as clear. In the US, especially in comedies, they are often a Southern-Fried Genius, instead. In Indian works, expect him to be a Tamil note  The Madras Engineer Corps was the very first unit of its kind established in India, and is also the originator of the Bangalore Torpedo mine

Note that this trope is about The Engineer as a particular type of character, not as a profession, so it would not actually comprise ALL that army engineers do. An engineer who deals with sanitation and construction of things like storehouses and office/administrative buildings would usually but not necessarily be outside this trope, and most characters referred to as "engineers" in media are actually closer in function to mechanics in the civilian field then they are to civic engineers. This trope applies primarily to Engineers as a palpable force in combat, be it as support or participating in battle.

There are various types of Engineers which feature heavily in media:

Not to be confused with Angela Spica, a.k.a. The Engineer, of The Authority (although with her powers and knowledge she fills the "engineer" role for them). Anthropromorphic examples include Resourceful Rodent.

These brainy, defenseless specialists are useful for capturing or repairing structures.

These brainy, defenseless specialists are useful for capturing or repairing structures.