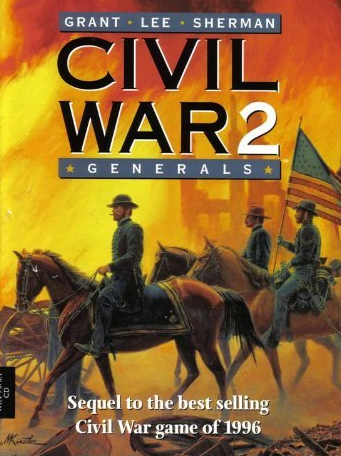 The Civil War Generals series is a pair of Turn-Based Strategy wargames developed by Impressions Games and published by Sierra Entertainment in the late Nineties. Both games allow the player to take command of one of the armies from the The American Civil War and lead their soldiers as they fight in some of the war's most famous battles.
Advertisement:

The first game, Robert E. Lee: Civil War General, was released in 1996. Its campaign mode allowed the player to fill Lee's shoes as commander of the Confederate Army of Northern Virginia as it fought in the most famous battles of the Eastern Theater, from First Manassas to the Wilderness.

The sequel, Civil War Generals II: Grant, Lee, Sherman, came out the following year and is best thought of as a vastly Updated Re-release. Among some of its most notable changes were:

As far as game mechanics are concerned, the two games are almost identical. Battles take place on a hex grid map, and each army's objective is to accumulate victory points by inflicting casualties, capturing supplies, and (in the second game) capturing key locations on the map. Capturing supplies is especially beneficial, since these supplies not only serve as a stockpile to replenish individual units' ammunition during battle but also can be used as currency to purchase better weapons.