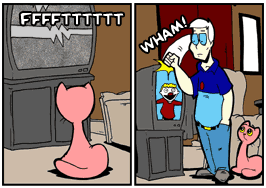 "This is how we fix things on the Russian–" [begins beating wrench against engine] "–Space Station!"
— Lev, Armageddon
Advertisement:

Also known as "Technical Tap", "Ape Mechanics", "Electronic Abuse", "Fonzarelli Fix", "Spike Spiegel School of Repair", "Clarkson Clang", or "Emergency Repair Procedure #1", this is a method of repairing malfunctioning devices by hitting 'em really hard. This is a case of Truth in Television, as many people will often do this with malfunctioning machinery, frequently with mixed results.

A common variation involves a character, having tried every method they can think of to get something to work and after working for hours with no success, hits the malfunctioning device solely for the purpose of Percussive Therapy, only for the device to respond to the Percussive Maintenance and start working again.

Compare Percussive Therapy where a character hits things solely for their own emotional benefit, rather than the proper functioning of whatever they're hitting, and Have You Tried Rebooting?, another common way of fixing malfunctioning technology. Contrast Percussive Shutdown where the hit is intended to stop a thing from working. Compare and contrast Healing Shiv, a weapon or technique designed specifically to heal and repair things attacked by it. For use on life forms, see the Dope Slap, Get a Hold of Yourself, Man!, Facepalm, Beat the Curse Out of Him, or Don't Make Me Take My Belt Off!.