Video Game / Zone of the Enders 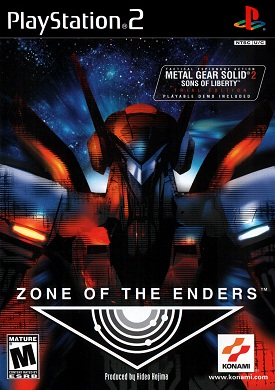 It was so nice of Konami to provide a free game with the Metal Gear Solid 2 demo.
Message of the blowing wind
Erasing memories
Stars are the witnesses of our existence
Change is what the world awaits
Could that be peace or war?
The answer no one knows
Trusting the break of dawn
The blue bird flies away
— The lyrics of Beyond the Bounds

, the opening of Zone of the Enders: The 2nd Runner.
Advertisement:

Good morning. Do you request to read TV Tropes' Zone of the Enders article?

Zone of the Enders is a Humongous Mecha series published by Konami and produced by Hideo Kojima, the creator of the Metal Gear franchise as well as the director of Snatcher and its Spiritual Successor, Policenauts.

The original, eponymous game (more distinctly titled Zone of the Enders: Z.O.E. in Japan) was a high-speed mecha combat game released in 2001 for the PlayStation 2. Leo Stenbuck, a kid living in a space colony orbiting Jupiter, falls into the cockpit of a Super Prototype Orbital Frame named Jehuty when the colony is attacked by the Martian rebel group, BAHRAM. Leo quickly discovers that BAHRAM has come to the colony for Jehuty, but realizes that their reign of terror won't end if he hands over the machine. With the help of Jehuty's A.I. program, ADA, Leo sets out to break through BAHRAM's forces, save his fellow colonists, and deliver Jehuty to the UNSF on the other side of the colony.

Zone of the Enders for PS2 had brisk initial sales, mostly attributed to the fact that the game was packaged with a demo for Metal Gear Solid 2. For many players, Z.O.E. was "the free game" that came with their demo. Nonetheless, the game sold well enough to gain a cult following of its own.

This game was accompanied by a sort of franchise-building initiative with several tie-in products. Zone of the Enders: 2167 IDOLO, a prequel anime OVA starring Viola Gyune (The Dragon of the game) and Radium Lavans, was released just before the game's launch. The protagonists join a resistance movement against the Earth using Idolo, the first Orbital Frame. This was followed by a full TV Series, Zone of the Enders: Dolores, I, where a space trucker named James Links receives the Orbital Frame Dolores from his estranged wife Rachel, one of Idolo's designers and a casualty of the OVA's events. The frame curiously thinks of the trucker as her uncle, spurring James to seek out and reconcile with his children. Both the OVA and TV series received DVD releases, and later in 2012 (in Japan), re-released on Blu-ray.

A sequel, Zone of the Enders: The 2nd Runner (ANUBIS: Zone of the Enders in Japan), was released on the PlayStation 2 in 2003. Miner and former BAHRAM soldier Dingo Egret finds Jehuty hidden on Callisto. Hostile BAHRAM soldiers arrive and Dingo is forced to fight his way to their command ship, where he meets his old colleague and BAHRAM's leader, Nohman. Dingo refuses an offer to rejoin the group, so Nohman shoots him. Dingo wakes up hardwired to Jehuty's life-support systems, unable to leave the cockpit. Ken Marinaris, a soldier Dingo fought on Callisto, explains that she's a UNSF spy and requests his assistance in exchange for having saved his life. Dingo escapes to Mars, battles BAHRAM forces, and clashes with Leo Stenbuck in the Vic Viper. He steels himself to settle the score with Nohman and finish the destined battle between Jehuty and its Evil Counterpart, Anubis.

A Turn-Based Strategy Spin-Off game, Zone of the Enders: The Fist of Mars (Z.O.E. 2173 Testament in Japan), was released for the Game Boy Advance as well. A boy named Cage Midwell finds a strangely powerful LEV hidden on a cruise liner. He climbs aboard along with a mysterious girl just before the ship is destroyed. The duo falls in with the rebel group BIS, which seeks to free Mars from UNSF oppression. Fist of Mars plays similar to the Super Robot Wars series, but changes the formula with a crosshair-aligning gameplay system that determines whether attacks hit or miss. Although stats determine how difficult this is, any unit can hit any enemy and dodge any attack if the player plays skillfully.

Despite middling sales, Zone of the Enders continues to be a cult favorite and was a bit of a pet project for Kojima. A sequel

was announced in 2012, showing off Darker and Edgier looks for Jehuty and Anubis and promising more fantasy elements. An HD Collection of the first two console games was released in October 2012 for PlayStation 3 and Xbox 360 (and came with a demo for Metal Gear Rising: Revengeance). Unfortunately, the ports were poorly remastered and ended up running at worse frame rates than the PlayStation 2 versions. In response, Kojima Productions and Hexa Drive (the same folks behind the HD re-releases of Rez and Ōkami) created a patch to fix the errors made by the original porting team, High Voltage Software. The patch was released in July 2013, rectifying the PlayStation 3 version of The 2nd Runner while the Xbox 360 version and both versions of the original game went untouched. The PlayStation Vita version of the HD Collection and the would-be-sequel

were put on hold in response.

Another remaster of The 2nd Runner, titled "Zone of The Enders: The 2nd Runner M∀RS" was announced at Sony's TGS 2017 Press Conference. Developed by Konami in conjunction with Cygames, this new remaster includes 4K graphics, remastered High-Def Sound, and the ability to play through the entire game in VR, from the perspective of the inside of Jehuty's cockpit (hence why the A in "M∀RS" is upside down in the logo). It was released on PlayStation 4 and PC via Steam on September 4, 2018.

This series has nothing to do with Ender's Game. Or the Zone of the Endermen, for that matter.