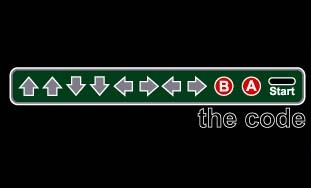 The Konami Code (known in Japanese as the Konami Command) is a specific version of the Classic Cheat Code, and is one of the most popular variants in video game history.

The code first appeared in Konami games on the Nintendo Entertainment System, hence the trope name, as the Nintendo Hard games couldn't be properly debugged if the programmers couldn't even get far.

The typical form is the directional combination followed by two buttons and then start and/or select, though most of the time, start is just pressed to start the game and not part of the cheat code proper. As the code is used on games of various systems, the actual buttons will vary. For the examples listed below that include a select before the start, in Contra, select was used to select a 2-player game after entering the code.

Though being well known, this has rarely been used as an outright cheat code since the early 16-bit days (as is the case with cheat codes in general). More often these days it's an Easter Egg that gives a cute effect. The code doesn't even have to use a standard controller as long as the directions can be pressed in some way.

open/close all folders
Konami
Other Games
Advertisement:
Other Media