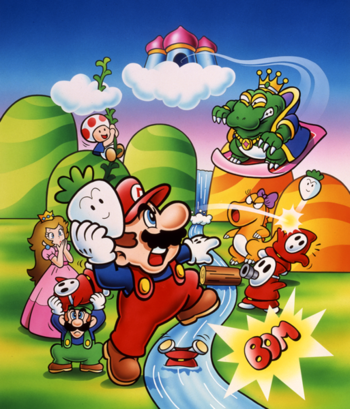 Mario and his friends have the dream adventure. Note that Bowser isn't there.
Advertisement:

Super Mario Bros. 2, originally released in 1988 in North America, 1989 in Europe and Australia, and 1992 in Japan, is the third installment in the Super Mario Bros. series. It revolves around Mario, Luigi, Toad and Princess Peach (known in the West as Princess Toadstool back in the day) travelling to the land of Subcon to save it from the tyranny of Wart, which has turned it into a land of nightmares. In a literal sense, because he gained his power by corrupting the Dream Machine. Interestingly, this mission was entrusted to Mario by way of a strange dream, in which one of the land's inhabitants begged the famed plumber for his help. This means that Subcon is a Dream Land, to which Mario and company access through a gateway identical to the one seen in the aforementioned dream; hence why many of the events and situations they'll experience, as well as the enemies they'll face (especially how they're faced, since Goomba Stomp no longer works), differ greatly from what Mario and his friends were used to until that point.

Of course, if you've been into the history of video games, you'll know the bigger reason why this dream has come into Mario's mind all of a sudden.

In Japan as well as the United States, Super Mario Bros. turned out to be a blockbuster hit, and the Killer App that Nintendo needed to get the Nintendo Entertainment System (and the Famicom, the Japanese version) into the homes of game players. Nintendo of Japan decided to strike while the iron was hot, and push out a sequel as quickly as possible, using both newly designed levels and levels originally created for the arcade version, VS. Super Mario Bros. - the result was titled Super Mario Bros. 2 (and later released internationally as Super Mario Bros.: The Lost Levels). But while the designers and Japanese videogame fans thought it was fun for being even harder than Nintendo Hard, Howard Phillips of Nintendo of America playtested the game

and just found it punishing to play, not fun at all. It was decided that the original Super Mario Bros. 2 just wouldn't work for American gamers, since it was both basically a retread of the first game and just too Nintendo Hard, traits that would negatively impact a video game market still recovering from the crash.

Mario, having a primary focus on vertical levels and co-op multiplayer; but when Nintendo netted a licensing agreement with Fuji TV, it was revived and rebranded with the mascot characters of Fuji's Yume Kōjō

("Dream Factory" or "Dream Machine") promotional event. When Nintendo of America rejected the Japanese sequel and needed a new one for western markets in a hurry (especially since Super Mario Bros. 3 was already on the way), they re-rebranded Doki Doki Panic to match the Super Mario Bros. characters, ported it from the Family Computer Disk System to the Nintendo Entertainment System, and gave the game a few additional visual upgrades (mostly redone animation), as well as quality-of-life features like adding a run button, improved music and a new boss character. As a result, Nintendo of America unintentionally fulfilled their Japanese sister branch's original intentions regarding the prototype, albeit without the co-op multiplayer; that wouldn't be introduced in its intended form until New Super Mario Bros. Wii, 21 years later.

This game introduced many of the series' iconic enemies (such as Shy Guys, Bob-ombs, Birdo and others) and abilities (such as picking up and carrying items and enemies), and it further developed and differentiated the four main characters (providing Luigi with an in-game taller, lankier appearance, giving Princess Peach her ability to float, and actually codifying Mario as the Jack-of-All-Stats for the first time). The game also received a Recursive Import to Japan in 1992 as Super Mario USA, thus fully wrapping up the canonization process (the only difference is that, in that country, the game is officially listed as the fifth console game and sixth overall, due to the release order). So it may have been a dream, but one that marked an important addition to the series.

Super Mario Bros. 2 was later remade for the Super Nintendo Entertainment System as part of the Super Mario All-Stars Compilation Rerelease, and then with further updates as the first of the individual Super Mario Advance line for Game Boy Advance. The game received a "sequel" in BS Super Mario USA, based on the SNES version released for the Satellaview add-on, and its story confirmed that the original game's events are indeed real, as in this follow-up the characters return to Subcon to protect it once again from Wart. The concept of Mario, Luigi, Peach, and Toad all being playable characters with differing stats and abilities in a Platform Game would resurface in Super Mario 3D World. Lastly, despite not having a dedicated game style in Super Mario Maker or its sequel, the former added several Mystery Mushroom costumes based on enemies and characters from this game, while the latter added assets from it via updates (Pokeynote including both the modern yellow incarnation and its original green design, a game mode involving Ninjis, a powerup allowing Mario to grab and throw enemies, and keys guarded by Phanto).