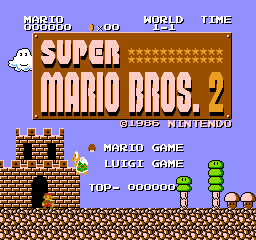 For Super Playersnote and we really mean it.
It's like Super Mario Bros. 1, except you die.
— Lewis

Released exclusively in Japan on June 3, 1986 for the Family Computer Disk System, Super Mario Bros. 2, also known worldwide as Super Mario Bros.: The Lost Levels, is the second game in the Super Mario Bros. series. Following the success of Super Mario Bros., Nintendo decided to follow it up with a Mission-Pack Sequel. There were four main differences between the original and the sequel: the two-player mode was replaced by the option to play the game as either Mario or Luigi, Luigi was given higher jumps but inferior traction, some of the graphics were updated, and the game was about as close to Platform Hell as one gets short of a ROM hack or the most hardcore Super Mario Maker levels.

The game came into existence when Shigeru Miyamoto and his crew were working on VS. Super Mario Bros. (an arcade version of the first Super Mario Bros.) and were adjusting the game's difficulty to make it suitable for the arcade's pay-per-play model (e.g. the number of Warp Zones were reduced and infinitive lives exploits were removed). Among the changes made to VS. Super Mario Bros. was replacing some of the Hard Mode Filler stages from the latter half of the game by making the earlier versions of these stages hard from the get-go and replacing the later versions with new stages (that would later be integrated into The Lost Levels itself). Miyamoto decided to create an alternate home version of Super Mario Bros composed entirely of new stages aimed specifically at hardcore fans of the original, resulting in the production of Super Mario Bros. 2 for the Family Computer Disk System.

Even though this was back when many games - including the first installment - were Nintendo Hard, the difficulty spike between this game and its predecessor was insane. In Japan, this had the effect of giving jaded Mario fans a new challenge to overcome (in fact, the game sold well in Japan, it sold 2.5 million units, and was the all-time best-selling on the Family Computer Disk System). However, when Howard Phillips, Nintendo of America's chief play-tester, and favorite of NoA president Minoru Arakawa, got his hands on the game, he found the experience of playing it to be absolutely punishing, and not at all fun. Based on Phillips' input, Arakawa made the decision not to release it in the United States and Europe. However, Nintendo of America absolutely needed a western Mario sequel in record time, so Nintendo Dolled-Up another Nintendo game, Yume Kōjō: Doki Doki Panic, and called it Super Mario Bros. 2. (Eventually, in Japan, the re-dressed game would get released under the title Super Mario USA.)

When the original Super Mario Bros. 2 was finally released in North America and Europe as part of the Super Mario All-Stars Compilation Rerelease, it was instead titled Super Mario Bros.: The Lost Levels. Worlds 1-8 were also included as the Unlockable "Super Mario Bros.: For Super Players" in Super Mario Bros. Deluxe for Game Boy Color. Keep in mind that these versions, as hard as they are, ease up the difficulty greatly from the original version; the game can be saved after every level rather than every world, and invisible power-up blocks were added to every dungeon level. Also, in both versions, it shares the same graphics as its predecessor, losing some of its uniqueness.

The original version of The Lost Levels has since been released in future platforms, including a port for the Game Boy Advance in 2004 which once again remained exclusive to Japan. In fact, it wasn't until 2007, twenty-one years after the game was released, that the original version was made available to Western gamers via the Wii's Virtual Console; and from that point the game hasn't missed the international market ever again, being available there on the Virtual Consoles of the Nintendo 3DS and Wii U, the NES catalogue of the Nintendo Switch, and as part of the rerelease of the first Super Mario Bros. for the Game & Watch for the franchise's 35th anniversary in 2020. For all of these re-releases, the game adopted the name of the All-Stars version in the West, to distinguish it from the international Super Mario Bros. 2 (though the game's title screen still shows the Japanese name).

Tropes differing from the first game: