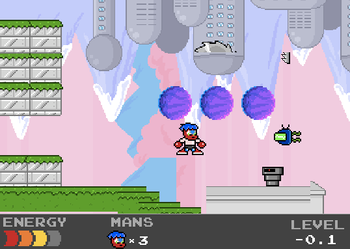 Sometimes the best level is one the designers never made. Minus Worlds are areas of the game a player can reach only by glitching or hacking. These secret areas do not typically correspond to valid, intentional level data at all — it is only by dint of the game's programming that these "junk data" manifest as a mostly playable level.

With the advent of modern 3D games, this has mostly fallen by the wayside, as random data would never create anything remotely close to a functioning 3D mesh. However, the collision detection in some 3D games is suspect; in some of them, you can actually leave the game world and explore a weird wasteland of partly implemented scenery and flickering polygons. In that case, the level is still there; the player has simply found a way to be where the game doesn't expect the player to be.

Compare and contrast with Dummied Out, which corresponds to content (and by extension, levels) that was designed to be played, but was intentionally made unaccessible in commercial releases.

Related to Kill Screen, which is triggered under similar circumstances. If a sprite appears in the game that was made out of similar 'junk data', see Glitch Entity. If a Minus World is used for Sequence Breaking, see Not the Intended Use. Not related to webcomic minus.