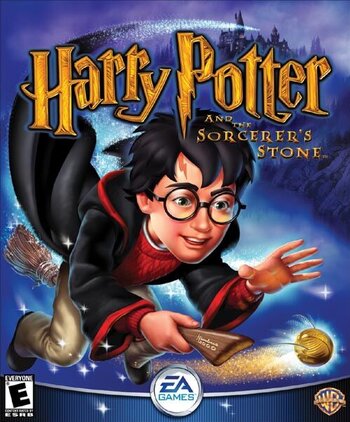 "Now, Hogwarts is full of secrets, Harry, so search behind every door. But keep in mind, not all secrets are rewarding."
— Albus Dumbledore, introduction in the PS1 and PC versions
Advertisement:

As was the norm at the time, the versions released on different platforms are essentially different games. But in general, Harry is the only Player Character, and all or most of the game takes place at Hogwarts, with the early part of the story getting quickly skimmed over. Gameplay consists of a series of linear levels, punctuated by learning new spells from the teachers. The Stations of the Canon come into play as you rescue Neville's Remembrall from Draco Malfoy, save Hermione from the mountain troll, and ultimately, stop Lord Voldemort from capturing the titular rock. Depending on the platform, other events from the original story may or may not be included.

The PlayStation game is notable for being the last mega-seller in the console's history, being (originally) the only console version of the Philosopher's Stone games. It was a massive success despite launching in the twilight of the PS1's life cyclenote a year after the PlayStation 2 had launched, selling 8 million copiesnote the first PS1 game in two years, since Gran Turismo 2, to do so, good for sixth all-time in PS1 sales ahead of iconic games like Metal Gear Solid, every entry in the Crash Bandicoot and Tomb Raider series, among many others.

In 2002, Harry Potter and the Chamber of Secrets became the first Potter game released on 6th generation consoles. However, with 2003 being a gap year between the second and third films, EA opted to release a Philosopher's Stone game for 6th generation consoles in that year. This game reuses assets from the preexisting 6th generation Chamber of Secrets game and is therefore essentially a Prequel to that version. It is also closer to the film than the other Stone games since the movie had obviously been released by that point.

In all versions of this game, the majority of the music was composed by Jeremy Soule, who would return for the next three games, or four, if you count Harry Potter: Quidditch World Cup.

Example of:
Pass Through the Rings