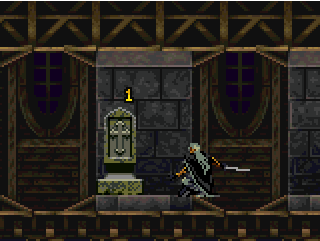 A wild TOMBSTONE appeared!
Alucard used SLASH!
It's not very effective...
All successful attacks must inflict some measure of damage, no matter how minor.
Advertisement:

You've gotten the Infinity +1 Sword (or plus more, even), the spikiest, glowiest armor and trinkets in the game, and your Made of Iron stats make you an almost Implacable Man under most circumstances...

...But the snail that randomly appears outside your hometown still does a measly ONE point of damage! In fact, this is the same amount it did when you first started out, and no amount of Level Grinding will ever change that.

For some reason (probably due to the original Dungeons & Dragons), many games absolutely refuse to let a player be utterly invincible and will let even the weakest enemies do token damage long after pure stat calculations should have zeroed it out.

In some games, weak enemies will only manage to inflict damage by landing the occasional Critical Hit. But unless there are other game mechanics at work, like self-inflicted damage caused by a distracting or disruptive attack, they shouldn't be able to hurt you at all with their furry paws while you're wearing your Flaming Armor of Awesomeness, Critical Hit or not.

Fortunately for you, many RPG systems apply scratch damage both ways: Your Squishy Wizard's fragile fisticuffs may not be a useful weapon, but even they can be counted on to deliver the token 1 point damage per hit (that is, when they hit), making him Not Completely Useless even when he's been Silenced or drained of his MP. Likewise, scratch damage can sometimes be used to probe for elemental weaknesses: If that Lv.0 magic fireball can inflict at least 1 point of damage, you don't have to risk a Level 100 Holy Hellfire only to discover that your enemy is impervious (or worse) to its effect. But this is by no means universal, and other RPG systems will happily reduce your attacks to zero points or "no effect" if your attack power is too low or the opponent's defense too high.

Occasionally, rare and elusive monsters may be designed entirely around the concept of scratch damage, with their total HP measuring in the single digits but absolutely nothing your strongest warrior can dish out ever scores more than the token 1 point damage. Expect these foes to be the only times where scratch damage is a practical means of attack; other opponents simply have too much HP for the token 1 point to make a practical difference (beyond an occasional Cherry Tapping).

Scratch damage is also common in Fighting Games, where a player's Special Attacks commonly inflict a small amount of damage even when blocked, and are referred to as Chip Damage. It is legitimately possible to KO one's opponent in this manner, but is considered poor sportsmanship (some Street Fighter games would in fact label the victory as "cheesy", with a piece of cheese for the victory icon).

Guaranteed to drive a Munchkin all the way up the wall (and probably through the ceiling due to his optimized Strength...) and is also the bane of those attempting a No-Damage Run, especially when coupled with Random Encounters.

If someone dies from this, it's a Death of a Thousand Cuts when done in overwhelming volume or Cherry Tapping if the last scant bit of Hit Points is depleted with such an attack after weathering a more brutal onslaught.

Damage Reduction may be either a cause or a counter to this, depending on game: It will either make one completely ignore small amounts of damage, or reduce it to 1.