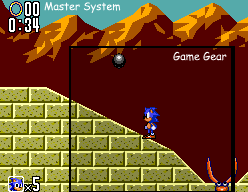 Dodging the bouncing ball can be easy or hard depending on the version.
"With the camera panned out, and just, with enough viewpoints, [Mine-Cart Carnage is] not that hard. You'll make some mistakes, your first time, sure, or if you're rusty like I am, but... at least it's not zoomed-in and like, requiring different timing. That'd be awful!"
— ProtonJon, playing Donkey Kong Country on SNES and comparing it to the Game Boy Color port
Advertisement:

If you're a gamer, you've more than likely run into Camera Screw at some point. Whether it's a controllable camera that constantly gets stuck on things or an Auto-Camera that abruptly changes angle mid jump, bad cameras have been the bane of gamers' existences for decades.

But what if the game hardware itself was to blame for the camera and not bad programming?

Enter Screen Crunch. This is what happens when a game's bad camera is caused by the screen resolution (or lack thereof). While it's not a porting-specific (or handheld-specific) issue, ports to handheld consoles tend to be plagued by this due to the small screens.

This trope was codified with the release of the Game Boy in 1989, though it wouldn't become infamous until the Game Boy Advance due to the many ports on that system.

Nowadays, screen sizes and resolutions, even for mobile devices, have become large enough that the crunch has mostly become a Discredited Trope. Most manufacturers have agreed upon 16:9, and the handful of aversions (most notably "tall" smartphones and the occasional 16:10 tablet) usually offer the player an option of either stretching the pixels to fit the screen or pillarboxing to emulate older games. And newer releases generally have no problem changing their aspect ratios and resolutions by themselves. Of course, this trope does still happen in some unfortunate cases.

Sub-Trope to Camera Screw. Also see Porting Disaster and Fake Difficulty. Often goes hand in hand with Trial-and-Error Gameplay. Not to be confused with Camera Abuse (when the viewscreen is crunched into smithereens either for humor or adding tension) or Shoot the Television (when a character destroys an in-universe screen). This is one of the reasons why developers might make a Reformulated Game instead. Similar to Pan and Scan for movies.