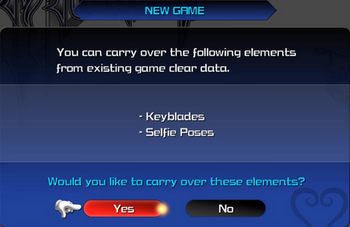 Play it again, Sam.
thanks link, you're the hero of hyrule
finally, peace returns to hyrule. this ends the story.
another quest will start from here. press the start button.
— The Legend of Zelda credit scroll
Advertisement:

New Game+ is the option of starting a new game by accessing a previous finished game, allowing you to start with improved stats, new costumes or items won beforehand. There are several benefits for doing this:

Of course, no matter how many special skills and items you can bring over to a new game, the characters almost never are able to remember the game's plot and fix any mistakes they may have made, or they are told that "You Shouldn't Know This Already." You can also just pretend that New Game+ mode is playing a new game while averting the With This Herring trope since you start off this time with much better gear. On the flipside, the early game becomes a cakewalk unless the enemies are beefed up accordingly.

In some special instances, going through a New Game+ run is the key to fighting the True Final Boss, either by taking advantage of options that were not available the first time around or simply because NG+ makes certain changes to the narrative to allow for a fork unique to this run. Some instances will also start the game after the story's opening prologue and/or tutorials, so that the player can jump right back into the action straight away rather than go through stuff they already know or doesn't take advantage of their NG+ skills/equipment.

This is named after the mode that is unlocked in Chrono Trigger, where the majority of the game's multiple endings can be attained in this mode. The original name translates roughly to "New Game with Strength". However, the concept itself dates back at least as far as the The Legend of Zelda series.

Subtrope of Macrogame and Post-End Game Content. It's very rare for this trope to be present alongside Playable Epilogue in the same game, but such cases do exist.

Warning, there may be spoilers.