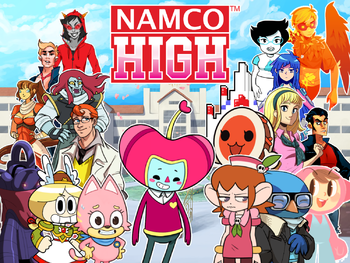 The gang's all here!note Left side, clockwise from the top: Terezi Pyrope, Taira, Tomari, Meowkie, Valkyrie, Anti-Bravoman, Nidia, Al B. Tross. Right side: Jane Crocker, Davesprite, Hiromi, Akiho Matsuo, Richard Miller, Mr. Driller, Blue Max, Lolo, Donko, Galaga. Center: Cousin.
"I think I know what the people want, I said. What they WANT, is to be able to manipulate their favorite classic video game characters into a variety of lurid but safe-for-work romantic encounters. What they WANT, for instance, is to cajole a cute Katamari into some sort of kissing situation with the spaceship from Galaga."
— Andrew Hussie
Advertisement:

Namco High is a Dating Sim by Bandai Namco Entertainment and Homestuck author Andrew Hussie. The game stars the Cousin of the Prince from Katamari Damacy as they navigate the romantic ins and outs of a high school setting. It features several characters from Namco Bandai's library (such as Lolo from Klonoa and the aforementioned ship from Galaga) and three "exchange students" from Homestuck. Six of the characters (Al B. Tross, Anti-Bravoman, Galaga, Lolo, Meowkie and Valkyrie) are free, and you can get others by purchasing either single characters or characters packs.

When it was up, you could play the game on the ShiftyLook website. Sadly, the website is no longer functioning. However, there is a working mirror up here

which can be downloaded here

(with all the paid characters too!).