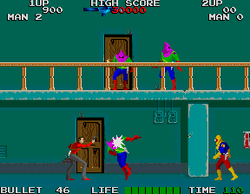 Rolling Thunder is an arcade game released in 1986 by Namco. It is a side-scrolling action game where players control "Albatross", a member of WCPO's "Rolling Thunder" espionage unit, who infiltrates the hideout of a terrorist cult named Geldra, led by a green-skinned humanoid alien named Maboo. Unlike other action titles, it is a little more slower paced, and is more about taking cover from enemy fire and conserving ammo than mindless running and gunning. You often have to find cover, hide behind doors (some which hold more ammo for your weapons) and leap up and down between floors.
Advertisement:

A Famicom/NES port was released in 1989. Although the Famicom version was an official release in Japan, the NES version was one of the few Namco games that were localized in the U.S. by Tengen without Nintendo's license along with Pac-Man and RBI Baseball (a localization of Namco's Family Stadium), resulting the game being released as one of Tengen's black cartridges. The original arcade version has also been re-released in various Namco Museum compilations.

Two sequels were released: Rolling Thunder 2, an arcade sequel released in 1990 that featured better graphics than the original and 2-player co-op (with Leila as Player 1 and Albatross as Player 2) with a Sega Genesis port in 1991; and Rolling Thunder 3, a Genesis-exclusive final entry centered around a new agent named Jay.

There is also an officially sanctioned webcomic, Rapid Thunder,

that continues the plot of the games.

Not to be confused with the unrelated 1977 action film of the same name. See also its Spiritual Successor, Time Crisis.

Using the knife also spares your special weapons, as completing a stage with a particular special weapon prevents it from being chosen again for the rest of the game.