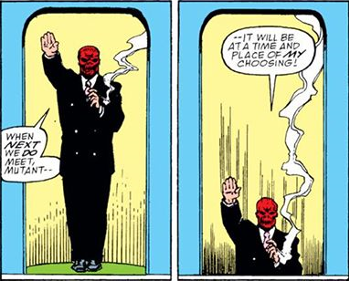 Once their plot is foiled the villain (less often, a hero) will always get away in the most undignified and cowardly fashion imaginable. If they didn't, who would the hero fight next episode? This is probably why the heroes either don't even bother chasing them, or else send Red Shirts after them with predictable results, or even help them get away. Other times, they're just being sporting.

No blockades, no manhunts, not even pursued by a bear. After all, it's at the end of the episode.

Regardless of the means, the escaped Smug Snake will gloat about how it "all went according to plan", maybe set off the Self-Destruct Mechanism in the Collapsing Lair, and return "triumphantly" next episode. Less often, you'll see them lick their figurative and literal wounds at having not only been beat, but forced to show the better part of valour and try to come up with a new Plot Of The Week that will work, throwing in a "Next Time, Tropeworthy!" for good measure.

Most villains who exit stage left also favor the Friend or Idol Decision and Sadistic Choice as backups, setting off small bombs or traps on loved ones to force the hero to choose between their capture or their friends' lives. This also frequently happens with Genre Blind villains who leave the hero in an easily defeated Death Trap room rather than stay and make sure the job gets done correctly, i.e. Just Shoot Him.

May be accompanied by a Hiss Before Fleeing, an Angry Fist-Shake or shouting "We Will Meet Again". See also Screw This, I'm Outta Here! for a villain flees out of cowardice rather then to prepare a new plot. Compare So Long, Suckers!, Karma Houdini and Know When to Fold 'Em. Contrast with Last Villain Stand where the villain decides to stick around and fight to the end.

There may be unmarked spoilers ahead!