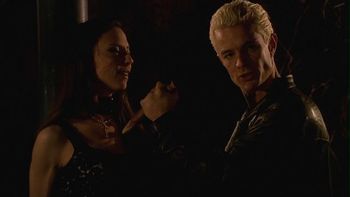 "I knew ... before you did. I knew you loved the Slayer. The pixies in my head whispered it to me."
Spike: I love you.
Buffy: Oh God...
Advertisement:

The Bronze re-opens after its repairs and refurbishment following the damage caused by Olaf the Troll, and Buffy watches as her friends dance. Spike shows up and starts discussing the bar menu with Buffy, who is confused at the fact he seems to be attempting to carry on a regular conversation with her. Willow reveals that she is suffering from headaches and nosebleeds as a result of her teleportation spell. Buffy spots Ben and offers her thanks to him for looking after Dawn.

A train pulls into Sunnydale Station, but when no one gets off the porter boards the train and finds all the passengers dead, before he too is attacked.

Buffy returns home and Giles suggests that Dawn be treated normally. Harmony, trying to get Spike sexually aroused, engages in a game in which she pretends to be Buffy. Buffy reads about the train murders and concludes that it's a vampire and not Glory. Buffy searches for Dawn and finds her with Spike, listening to one of his scary stories. Dawn admits to her own crush on Spike, but really shocks her sister when she says that Spike has a crush on Buffy, making Dawn's interest irrelevant.

Buffy and Xander investigate the train and Buffy confesses the possibility of Spike loving her, though Xander finds it very funny and is more concerned with Dawn's crush no longer being on him. Buffy finds her mother and sister talking in the kitchen with Spike; Joyce subsequently explains that Spike arrived to apologize for the situation with Dawn. Spike tells Buffy that he believes he knows where the vamps from the train are.

On a stakeout in Spike's car, Buffy is unnerved by some of Spike's behavior, such as offering her bourbon, asking her what kind of music she likes, and the fact that he is doing this for free. Buffy and Spike enter the vampires' lair, but the vampires immediately run off at the sight of the Slayer. Buffy realizes that the warehouse is a long-established vampire nest, and thus they couldn't have been involved in the train massacre. When Spike goes so far as to unwittingly hold the door open for her, Buffy finally demands to know why he is acting like this and if everything that just happened was Spike's version of a date. At first, Spike loudly denies it, but then asks, in a hopeful manner, "Do you want it to be?" Buffy is immediately disgusted. Despite Spike's pleas and confessions, Buffy refuses to listen to him and denies that there is something between them, insisting that Spike is still a dangerous villain and, being soulless, is incapable of such emotion. Having completely and brutally rejected Spike, Buffy departs the warehouse in horror and disgust. Despondently returning to his crypt, Spike is greeted by his sire and longtime love, Drusilla.

Drusilla tells him of the events in Los Angeles and tries to convince him to return with her. She's already aware of the chip in his head and tries to convince him he can be evil, even with the chip. Harmony arrives and yells at Drusilla for hurting Spike, however Spike quickly kicks Harmony to the curb, announcing that not only is Drusilla back—he's back. Joyce and Willow talk to Buffy about the problem with Spike and tell her she has to make it clear to Spike that there is nothing between them. Buffy agrees, but tells Willow to do "something" for her while she is out...

Spike and Drusilla dance at the Bronze before Dru spots a couple on the catwalk for them to feed on. She snaps the neck of the girl, offering her to Spike before taking the guy for herself. Spike hesitates initially but soon vamps and bites.

Buffy discovers the extension of Spike's lair underground and a shrine dedicated to herself. As she returns to the surface, Buffy finds Spike and Drusilla waiting for her. Spike watches Drusilla shock Buffy with a cattle prod. After the Slayer collapses, Drusilla turns to Spike, only to be shocked herself as he seizes the cattle prod and uses it on her.

Buffy awakens to find herself chained up in the underground space below Spike's crypt, Drusilla tied to a pole across from her. Spike professes his adoration and offers to kill Drusilla to convince Buffy of his love. He threatens that if Buffy does not return his love, he'll untie Drusilla and let her kill Buffy. Spike asks for only a small sign that Buffy could love him. Buffy rejects Spike again and he goes into a rage about women being so difficult. Harmony arrives and shoots Spike with a crossbow bolt. While Harmony and Spike fight, Drusilla breaks free and goes after Buffy while the Slayer is still chained up. Spike saves Buffy. Realizing that the Spike she once loved is gone forever, Drusilla leaves Sunnydale heartbroken. Harmony leaves Spike, telling him it's completely over between the two of them. The minute she leaves, Buffy physically attacks Spike and storms off.

Spike quickly tracks Buffy down and desperately attempts to get her to talk things over with him, but Buffy makes it very clear that he is no longer a part of her life, and he is to stay away from her and her family and friends from now on. Undeterred, Spike attempts to follow her into her house, but discovers that she has had his invitation revoked. As he spends time recovering from this, Buffy merely glares at him with disdain before shutting the door in his face.