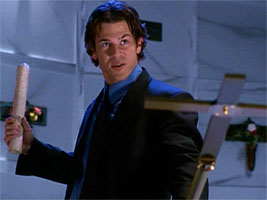 Wesley is hunched over the scroll of Aberjian, still trying to figure out what the hell "Shanshu" means. Upstairs, a hooded figure is skulking around the office. Angel pricks up his ears. A little late for visitors. Tense music builds as he sneaks behind the cloaked figure and taps his shoulder. With a girlish scream, the person turns and pulls his hood down to reveal that it's David Nabbit. He decided to blow off his board of directors and hang with Team Angel, dressed in full larper regalia. Wow, just—wow.
Advertisement:

Meanwhile, the folks at Wolfram & Hart are conjuring up a demon, Vocah, who has come to separate Angel from the Powers that Be. Vocah gripes, "You lost the scroll of Aberjian?" Holland explains that it was stolen, and Lilah adds that Angel hasn't had time to fully study it. Lindsey offers to get it back—it was his error. Vocah angrily states that he will retrieve it himself. He asks who has it, and Holland says with a hint of embarrassment, "Angel." Vocah reiterates that he was summoned for "The Raising," and without the scroll, he can't perform The Raising. Lilah says that they're aware of the irony.

Uncomfortable scene at Angel Investigations, with everybody waiting for David to pack off and leave, which he finally does. Wesley finally locates a reference to Shanshu in his books—it means death. Angel doesn't even glance up from his book. Ho hum. Wesley assures him that the jury's still out, so it's a good thing that Angel's not concerned. ...Not even remotely concerned.

In a dark alley, two police officers notice Detective Kate Lockley has shown up. The duo make light of her propensity for listening in on the police scanner for activity involving the occult. Kate tells them to stay put, ignoring their offers for backup, "or a Ouija board." Hardy har. As she walks past a dumpster, Angel emerges with a homeless bag lady on his arm. She scurries off while Angel stops to chat with Kate. She demands to know what Angel killed, and he begrudgingly tells her it was a slime demon. Kate gets hostile, telling Angel that all she cares about is ridding the city of his kind. She hasn't forgotten that his "kind" who killed her father. And off she stomps.

The next morning, Wesley confesses that the prophecy—while not exactly good news—doesn't alarm him nearly as much as Angel's reaction to that news. Death doesn't bother him, because there's nothing in life he wants. Angel arrives from downstairs, and Cordy asks if he wants some coffee. He doesn't, so she offers him a doughnut. Angel chuckles and insists, "I don't want anything." Cordy looks stricken. Wisely, Wesley exits stage left, saying he's off to the rare book store to confirm his findings. On his way out, Wes suggests that Angel go consult the Oracles again, but Angel doubt they'll tolerate any more visits.

Inside the Oracles' realm, Mr. and Mrs. Oracle are ticked off. They hate these kinds of intrusions. The camera pans, revealing that it's not Angel but Vocah who has crossed their threshold. The demon states that a "new order" is coming, and a scythe materializes from behind his back.

The next day, as Cordy strolls through a flea market looking for a gift for Angel, Vocah invisibly brushes up against her. Screaming in pain, she collapses on the ground and is inundated with hundreds of visions all at once.

Angel is downstairs locking up the Scroll in his weapons cabinet when he senses a disturbance in his apartment. He doesn't have time to investigate, however, as the phone rings—it's the hospital. Angel hurries off. The Demon steps up to the cabinet and easily breaks the lock, taking the Scrolls and leaving something in its place.

At the hospital, Angel finds Cordelia screaming and restrained to her bed as the doctor explains she's suffering from a psychotic episode. The doctors can't seem to find a cause or be able to sedate her.

Outside the office, Angel parks his car and steps out onto the street. Suddenly, a huge explosion sends Angel hurtling through the air. Inside the collapsed building, Angel searches for Wesley and finds him unconscious. As the medics load Wesley into an ambulance, Kate arrives to grouse some more. Angel doesn't have time for this. Hotheaded Kate says that he's a witness to a major crime and isn't leaving. Incensed, Angel snarls that if she's looking to be enemies, "Try me," before storming off into the night.

Back at Saint Matthew's Hospital, Wesley is patched up but still unconscious. Angel heads upstairs to look in on Cordy (who is now catatonic) and promises to help her. Taking her hand, Angel notices a black symbol on the back of it.

Outside the entrance to the Oracles, Angel has a sketch of the mark. He enters only to find the two Oracles have been slain. The spirit of the female speaks to Angel, telling him that "things are unraveling." The Mark belongs to a warrior of the Underworld named Vocah. Only the Scroll can cure his friend. Angel asks where he can find him, and the Oracle says that he "hides behind man's law." Angel takes the bloodied scythe, knowing just where to go.

Inside a mausoleum, five vampires are chained to a large wooden crate with iron bars, while a bunch of hooded monks watch an incantation led by Vocah. Outside W&H, Lindsey, Lilah and Holland are getting into limos as Lilah wonders if they're late. Holland says it's better to be fashionably late to a ritual—the blood rites drag on forever. Angel watches from the bushes, and as they drive off he follows.

Inside, Vocah is still reading as the W&H group arrive. Dejected, Holland remarks that they haven't even gotten to the Latin yet. Suddenly, Angel crashes through the stained-glass wall, and he and Vocah begin to fight with scythes. Lindsey grabs the Scroll and continues the chant. The vampires chained to the cage suddenly disintegrate and turn to dust as a strong wind whirls around the box. Holland orders the crate removed as he, Lilah and the others make a break for it. Angel gets the upper hand in the battle and embeds his scythe in Vocah's melon. Angel turns to take the Scroll only to find that Lindsey is holding it. Lindsey, keeping Angel at bay with a cross, brags about how it was foretold that all of Angel's connections that would be severed. With that, Lindsey holds the scroll over a blazing cauldron. Angel throws the scythe and neatly slices off Lindsey's hand, which sends the scroll flying. Angel swipes it and leaves Lindsey writhing on the floor.

Wesley sits by Cordelia's bedside, reading from the Words of Anatol. Angel looks at Cordy's hand and sees that Vocah's mark is gone: Cordy has come out of her daze. She confides to Angel that she "saw them all—so much pain," and that they have to help them. Angel assures her that they will.

Flash-forward to Cordy's apartment, two days later. Wesley, still looking at his books, mutters, "Oops." He may have made a tiny mistake. As a vampire isn't alive, he technically can't die—the word "Shanshu" is saying that Angel will get to live before he dies. That he will become human. Angel smiles. That'd be nice. A nonplussed Cordy points out that as tiny mistakes go, that's NOT one. Nevertheless, this is a positive development.

The mysterious box sits in the vault at Wolfram & Hart. Lindsey's arm is in a sling, and Holland tells him that the "Senior Partners" were impressed with his sacrifice. Lindsey is less than overjoyed at this news, but Holland promises they're about to even the score with Angel. Lilah peers though the bars and says they're all pleased to have her here. The disheveled creature turns out to be Darla.