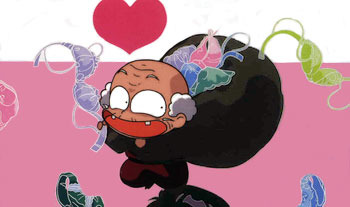 "What a haul, what a haul!"
Mike: They don't even know what panties are, yet they feel compelled to raid them.
Crow: Every male of every species has the biological urge to panty raid.
— Mystery Science Theater 3000, "The Horror of Party Beach"
Advertisement:

An individual — almost always a pervert of some kind — who steals and collects women's (or girls') underwear, usually worn/used. Almost always presented as a reprehensible individual and usually an enemy of the hero, and just as frequently played for laughs. They can be divided into the Stalker with a Crush — who steals a specific person's underwear as part of a general stalking campaign—and the indiscriminate, compulsive underwear thief—who usually doesn't engage in more serious sexual offenses and is more likely to be treated as a comic figure. One might call such a character a "knicker nicker".

Panty Thieves usually go about their business while wearing Stealth Clothes. An unintentional version is Kleptomaniac Hero Found Underwear; in this case, someone is trying to steal something else, and ends up with panties. An Impossible Thief may steal the panties that their victim is currently wearing, usually without even being noticed until the thief presents their trophy for all to see.

Usually this is an anime trope (due to the fact that in Japan, clothes lines are predominant while the West uses dryers), but Western culture has independently produced the college prank of panty raiding (which has been out of fashion since the sexual revolution of the sixties). Panty raids are usually perpetrated by groups of perverted young males, rather than just one guy.