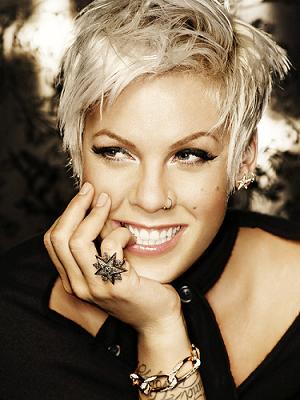 P!nk (real name Alecia Beth Moore, born September 8, 1979) is an American pop Singer-Songwriter. She first gained popularity in 2000 as an R&B singer before taking creative control of her career and switching to a more retro pop/rock sound, though her R&B origins can still be heard from time to time.

Throughout her career, now over a decade long, P!nk has racked up three Grammy Awards, two Brit Awards, and 12 Top 20 hits, including two (solo) number ones: "So What" and "Raise Your Glass". With album sales over 30 million and single sales over 70 million, she has experienced both critical and commercial success. In 2009, Billboard named her the number one pop artist of the decade.

Not to be confused with Pink Floyd.

"The Truth About Tropes":