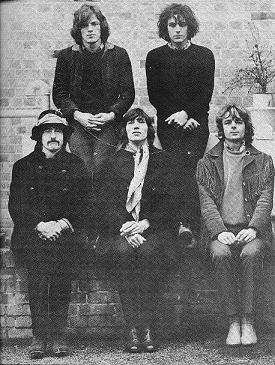 Pink Floyd in January 1968, from the only known photoshoot during the five months that all five members were together.note L-R: Nick Mason, David Gilmour, Roger Waters, Syd Barrett, and Richard Wright.
The band is just fantastic, that is really what I think
Oh, by the way, which one's Pink?
— "Have a Cigar"
Advertisement:

Pink Floyd was a British Psychedelic and Progressive Rock band which formed in 1964. The initial line-up consisted of Syd Barrett and Rado "Bob" Klose on guitar, Roger Waters on bass, Richard Wright on keyboards, and Nick Mason on drums. They recorded several songs before Klose left to focus on studiesnote these songs would later be released in 2015 on the EP 1965: Their First Recordings.

The four-piece then went on to gain a reputation as one of the foremost British psychedelic bands, releasing two singles and the now-classic LP The Piper at the Gates of Dawn before Barrett’s mental state, exacerbated by heavy drug use, began to decline significantly. The band then recruited David Gilmour, a childhood friend of Barrett and Waters, into the band, eventually replacing Barrett during the making of A Saucerful of Secrets. While Barrett's state declined to the point where he left the music industry and became a recluse, he would remain a massive influence on the band and haunt the band’s future music.

After Barrett's departure, Pink Floyd struggled initially, with the period between the albums More and Atom Heart Mother (or Obscured by Clouds, for some fans) generally considered to be their Audience-Alienating Era, and the band looks back on their albums between Atom and Obscured with some embarrassment. But, by the time of 1971's Meddle, they began to tone down the experimentalism and Epic Rocking, refined their signature sound, and eventually hit the big time with their next album, The Dark Side of the Moon. The lyrics became Darker and Edgier, mostly revolving around themes of isolation, death, insanity, and criticisms of modern society. A re-occurring theme of isolation from society also began to become more visible as Waters took more control of the band, and they began an impressive run of success with a series of complex Progressive Rock albums.

The Dark Side of The Moon began what most consider their golden era, and was followed by the albums Wish You Were Here and Animals. By the late 1970s, Roger Waters was firmly in full control of the band, and was calling most of the shots on the band's direction creatively. Next came 1979's The Wall, their tribulated Rock Opera classic. However, by that point, the band was beginning to splinter, and Richard Wright—who defined much of Pink Floyd’s sound—was fired during the making of the album.

By the early 1980s, near the end of Waters' tenure with the band, the music became heavier, and the lyrics very personal. Next came the polarizing The Final Cut (considered, by most, a Roger Waters solo album in all but name), which would become Waters' last with the band. In 1985, Waters declared that Pink Floyd was "a spent force" and chose to leave. As he left, he tried to dissolve the band but failed. After Waters left, and with Gilmour and Mason left standing, the band did a U-turn and returned to a more experimental (although radio-friendly) sound, with slightly Lighter and Softer lyrics, at times seeming to focus on Gilmour's personal life, and occasionally alluding to the fallout of Waters' departure.

A Momentary Lapse of Reason, (considered, by most, a David Gilmour solo album in all but name) was released in 1987, featuring Richard Wright as a session player. In 1988, the band released a live album from the resulting tour, The Delicate Sound of Thunder, which would make Pink Floyd, true to their Space Rock image, the first band in space when a Russian cosmonaut took a cassette copy aboard the space station Mir. The first album with Wright as a re-instated full band member, however, would ultimately be their last album for 20 years, 1994's The Division Bell. Waters, for his part, went on to have a mildly successful solo career, and since the end of The '90s has mounted several highly successful concert tours. In hindsight, Waters has since regretted what he did (though he doesn't regret leaving) but his relationship with Gilmour remains strained.

After a live album in 1995, Pulse, Pink Floyd effectively broke up, with all the members going off to solo careers. In 2005, there would be one last reunion of the Waters/Gilmour/Wright/Mason line-up for the benefit concert Live8, which proved to be a bitter-sweet moment. Almost one year to the day after the concert, Syd Barrett, the inspirational early front-man, died from pancreatic cancer. The surviving members were of course devastated, though they chose not to attend his funeral. Richard Wright sadly passed away next, dying of lung cancer in 2008. For the next six years, aside from reissues and remasters of existing Floyd material, the band remained dormant.

In November 2014, Gilmour and Mason unexpectedly released a new Pink Floyd album, The Endless River, assembled from some new instrumental material, but made primarily from rehearsals and jamming recorded during the sessions for The Division Bell. This turned out to be just a one-off, the album put out without any intention of a tour or any follow-up projects, with Gilmour and Mason in the press saying it was effectively both a tribute to Wright and at the same time the band's swansong. In 2018, Mason launched the group Nick Mason's Saucerful of Secrets, which performs Pink Floyd's pre-Dark Side of the Moon material, and has received considerable fan and critical acclaim. Gilmour and Waters both continue to tour and record as solo artists.

Gilmour and Mason reunited as Pink Floyd in 2022 to record a one-off charity single, "Hey Hey Rise Up", to benefit humanitarian efforts in Ukraine after the Russian invasion. The single samples the Ukrainian folk song "Oi u luzi chervona kalyna" ("Oh, the Red Viburnum in the Meadow") as performed by Andriy Khlyvnyuk of the Ukrainian band Boombox, who left his band's American tour to fight for his homeland. Khlyvnyuk posted an Instagram video in which he sang the song a cappella in military fatigues with a rifle over his shoulder while standing outside St. Sophia's Cathedral in Kyiv. When Gilmour, who has a Ukrainian daughter-in-law, saw the video, he decided to reunite with Mason to record the song, backed with longtime collaborator Guy Pratt on bass and Nitin Sawhney on keyboards. This is the first time Pink Floyd worked with an outside lead vocalist since Roy Harper sang on "Have a Cigar" in 1975.

As to the band's place in rock history, Pink Floyd's influence extends across hard rock, Electronic Music, Ambient and Alternative Rock, as well as the elaborate stage shows that popular music artists of all genres routinely take on the road. David Gilmour is widely considered one of the best rock guitarists ever, for his melodic solos and mastery of tone and vibrato, as well for his voice, used often in contrast to Waters' vocals, or complement his guitar parts. Syd Barrett, despite his short and troubled tenure in the band, is still renowned for the highly experimental music he created, and his lyrics as well are held in high regard. Roger Waters' lyrics are well-known for their high quotient of satirical humour and general quotability, as are his strong bass-lines and his highly dramatic vocals. Keyboardist Rick Wright was the band's own acknowledged "secret weapon" for his backing vocals and occasional lead vocals along with his jazz-influenced keyboard textures, which became a key component of the band's sound. Nick Mason... Er, is the drummer, and is the band's official archivist. Mason gets very little (though not none at all) in the way of writing credits note in fact, the only reason he had a credit on "Speak to Me" was because Waters gave it away, vocal parts note he speaks through a ring modulator on "One of These Days," recites an electronically distorted poem on "Signs of Life," and sings on the officially unreleased "The Merry Xmas Song" and "Scream Thy Last Scream" alongside Barrett, and on "Corporal Clegg" alongside Wright and Gilmour, or overall notice, but he ironically is the only member to have played on every Floyd record note Gilmour wasn't there for the first, Wright didn't play on The Final Cut, and Waters left after that record and according to biographer Nicholas Schaffner, is responsible for many of the band's signature sound effects.

Not to be confused with P!nk.

The soundtrack to Zabriskie Point from 1970 is also sometimes considered for inclusion. note 1  Especially by people trying to retail it. They were certainly not the only band whose work was used on the soundtrack, but they did make the biggest contribution, including new material specifically written and recorded for it under director Michelangelo Antonioni's (awkward, inexpert and nebulous) musical direction (How inexpert? He rejected an early draft of "Us and Them" because he thought it sounded "like a church" and wanted more "Careful With That Axe, Eugene" type material). Unlike the films above, there's probably around a 50/50 split between those who know Zabriskie Point for its Floyd connections, and those who know it for its award-winning director or cinematic qualities. note 2  They also recorded a soundtrack to The Committee (1968), a Mind Screwy, philosophical independent black-and-white film noir. The film has since been released on DVD, Internet sites etcetera, and the Floyd contributions to the soundtrack have appeared on some rarities and outtakes type compilations, but both are sunk in what is unsurprisingly deep obscurity.

The 1992 box set Shine On, which collected and remastered seven albums spanning the period from Saucerful to Lapse, also had an extra disc named The Early Singles, which for the first time collected (in mono) non-album singles and BSides that had previously been scattered around various compilations like Relics and Works, or in some cases, weren't widely available at all.

, that included massive, multi-disc expanded reissues of The Dark Side Of The Moon, Wish You Were Here, and The Wall. The fans went wild. In 2016, a massive 15-disc boxset, The Early Years 1965–1972, centering on the early work before The Dark Side Of The Moon and including a mountain of previously-unreleased material, was released to the delight of fans and to critical acclaim. The boxset was also the debut of the band's new label, Pink Floyd Records, a sub-imprint of Sony that will be responsible for any new reissues, including new re-pressings of all the band's albums on CD, and for the first time in a long while, on vinyl.

Another Trope In The Wall: