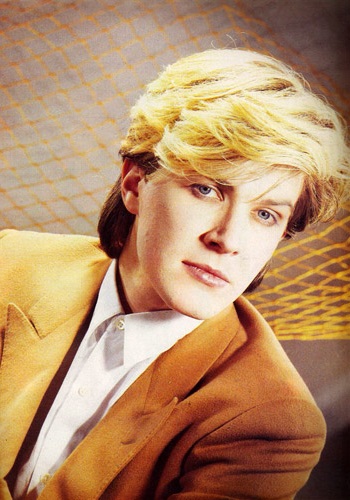 David Sylvian (born David Alan Batt, 23 February 1958) is an English musician who may be best known for appearing in the New Romantic / Glam Rock band Japan in the late '70s to the early '80s. After inner tensions between band members led to a falling out, Sylvian pursued a solo career, crafting music that was more mature and artsier than his previous work. He has since gained a respectable cult following. Sylvian has also dabbled in poetry, visual art and photography. He has been photographed by Anton Corbijn (who also produced some of his music videos), and has collaborated with Ryuichi Sakamoto (more closely in his solo material) and with King Crimson guitarist Robert Fripp (their efforts combined produced two albums in the early to mid '90s). Sylvian was married to Prince protégé Ingrid Chavez from 1992 until 2003. Throughout his career, both in Japan and solo, he has relied on his brother Steve Jansen (né Stephen Batt) as a percussionist.

His solo works represent an artistic evolution, as Sylvian proceeded to dispose of the flamboyancy, get a hair cut, and adopt more Baroque, Chamber and Jazz influences that slowly began to resemble the latter-day, sophisticated Art Pop works of artists like Peter Gabriel or Talk Talk (with a little bit of Avalon-era Roxy Music thrown in for good measure.) This is particularly present in 1984's Brilliant Trees; but he took an even more stripped-down approach in 1987's Secrets of the Beehive, which extracted the electronics from that album and the soundscapey Alchemy and Gone to Earth and replaced them with lush string, violin and piano arrangements. After some experimental collaborations and a twelve year (!) wait, he made a solo comeback in 1999 in the form of Dead Bees on a Cake, which took a slightly darker, more Ambient and adult contemporary approach to his classic pop leanings. His sound palette would mutate again with 2003's Blemish, which removed everything but his harmonized voice, avant garde guitar playing and glitching electronic drones; this new style would be mined and expanded on Sylvian's subsequent albums.

David takes a very serious crafting approach to music, but it's always all-around artsy. He's also known for being a bit of... a hermit. Don't expect him to come out of hiding unless it's for something important.