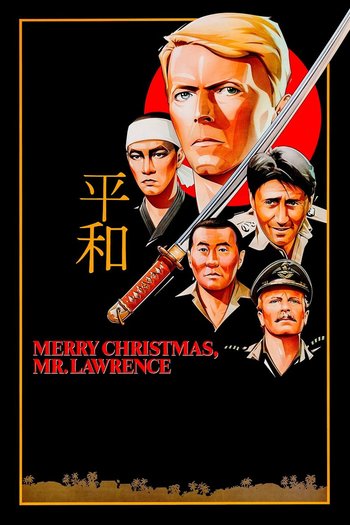 "I'll go walking in circles while doubting the very ground beneath me..."
Advertisement:

Merry Christmas, Mr. Lawrence (titled Furyo in some European countries) is a 1983 film directed by Nagisa Oshima, based on the 1963 novel The Seed and the Sower by South African writer Sir Laurens van der Post. Set in a Japanese POW camp in Java during World War II, the film focuses on the Culture Clash and building tensions between the Japanese overseers and the English-speaking Allied prisoners. Oh, and there's Foe Romance Subtext. An awful, awful lot.

Captain Yonoi (Ryuichi Sakamoto) is the camp's straight-laced commandant, devoted to discipline, order, and his beloved country. When he is called to attend the military trial of Major Jack Celliers (David Bowie), he is fascinated by the prisoner's display of honour and dignity. When Yonoi questions Celliers on whether he can prove he was tortured, Celliers gives him proof (by taking off his shirt). Yonoi decides to transfer Celliers to the prison camp, and it all goes downhill from there...

The situation is not helped by Hicksley, the prisoner rep, refusing point blank to furnish Yonoi with details of which prisoners are arms experts (claiming that it's a violation of the Geneva Code, which Japan hadn't agreed to), stubbornly refusing to involve himself in any sort of attempts at cross-cultural understanding, and generally being an annoying and ignorant eejit. Caught in the middle of all this madness is the unfortunate Colonel Lawrence (Tom Conti) of the title. A mild-mannered man, Lawrence attempts to bridge the cultural gap between captives and captors, not that this is a guarantee of safety, especially with the brutal and yet terribly human Sergeant Gengo Hara (Takeshi Kitano).

Examining power, cultural differences, tolerance, forgiveness and taboos, Merry Christmas, Mr. Lawrence is very much a character and psychology-driven film, because POW camps aren't known for their exciting itineraries. The film is also of note for being a Japanese film set in a Japanese POW camp, meaning the director shares nationality with those in charge rather than the prisoners. Ryuichi Sakamoto also composed the soundtrack. With added lyrics, the main theme

even became an international hit as "Forbidden Colours"

in collaboration with David Sylvian.