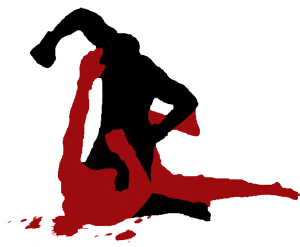 Always bet on black. Cause right now, he's getting red all over the place.
"This time, Boggs didn't put anything in Andy's mouth, and neither did his friends. What they did do was beat him to within an inch of his life."
— Red, The Shawshank Redemption
Advertisement:

Put away the magic, energy blasts, and witty banter. Beauty Is Never Tarnished, Made of Iron, Toon Physics, and Hollywood Healing, if they were present in the story before, all are temporarily turned off. This is the scene where someone pummels, punches, kicks, beats, and/or batters another person to a limp, bruised, bloody pulp. If it's a robot or other mechanical protagonist enduring one of these, expect to see lots of sparks, exposed wires, lights going out, and fluid leakage very symbolic of blood. Note that as far as Fight Scenes go, this is quite one-sided. That Second Wind you're waiting for? Keep waiting. It doesn't end that way.

Even when the victim can no longer even try to strike back (or block or dodge, for that matter), or if he never even had a chance to, the attacker just keeps going. It takes all the victim's determination just to keep breathing. And sometimes, even that may not be enough — some attackers take this to its logical conclusion and beat the victim to death (in which case, this trope may well continue to segue into Pummeling the Corpse, especially if the aggressor is just that angry).

Dialogue is limited. At most, a particularly cold attacker may continue to mock or insult the victim between blows. Some blows are delivered off-screen; sounds are sometimes more disturbing than visuals, anyway.

In short, that scene where Violence Is Disturbing runs high. Little to no flashiness and more brutal, often gory.

If both combatants hand out a brutal beating, it's How Much More Can He Take?. If the visceral hand-to-hand element is emphasized in the beatdown, then it's Extreme Mêlée Revenge. If the victim is trying to get away, the attacker may need to inform them that You Will Not Evade Me. This is often the punishment for pushing a character's Berserk Button.

Compare and contrast with the Curb-Stomp Battle (where the recipient is defeated quickly and decisively, instead of being subjected to a prolonged assault; they also usually lack the Nightmare Fuel element of this trope) and contrast Once Is Not Enough. Compare Unstoppable Rage and Tranquil Fury. Often ends with There Is No Kill Like Overkill, because when an over-the-top asskicking ensues, it's probably because the attacker wants their victim Deader Than Dead. "The Reason You Suck" Speech, when someone tells another why they're such a shitty person, and Break Them by Talking, when someone manages to make another breakdown just from talking to them, are the verbal equivalents of this.

Example of:
Fake a Fight