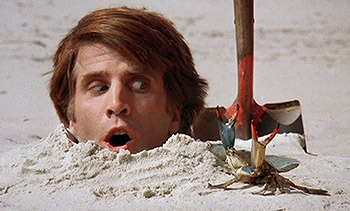 You want to dispose of a guy? Give him a particularly nasty end? Don't want to get your hands dirty? The sand necktie is your best friend.

Bury him up to the neck and watch starvation and dehydration do their job. In the desert, it's the sun that'll finish him off instead. At the beach, it's the tide. Not to mention the various animals that will be quite happy to find a piece of meat on the ground that can't fight back (in the desert, it's usually fire ants, while if it's a beach it'll be crabs and seagulls).