Film / HOUBA! On the Trail of the Marsupilami 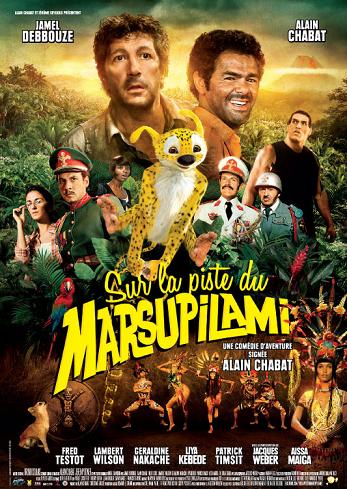 [screen shows a photo of Pablito next to a llama]
Clarisse Iris: This is your guide, Pablito Camaron.
Dan Geraldo: On the right or the left?
Advertisement:

HOUBA! On the Trail of the Marsupilami (French title: Sur la piste du Marsupilami) is a 2012 Franco-Belgian movie, written, produced and directed by Alain Chabat. It is an adaptation of the Marsupilami, a comic book character created by André Franquin in 1952.

Dan Geraldo (Chabat), a washed-out reporter, is given one last chance to revive his career. He must go to Palombia to report on the Paya people and the secret of their longevity. With his guide Pablito Camaron (Jamel Debbouze), he ventures into the Palombian jungle. In the process, the duo confirms the existence of the Marsupilami, a mythical creature.

Meanwhile, 82-year-old botanist Hermoso discovers an unknown species of orchid, which he find out can be used to create a rejuvenating potion. With the help of the treacherous Corporal, he topples the Palombian dictator, General Pochero (Lambert Wilson), and goes hunting for the Marsupilami, which happens to be linked to the orchids.

Add in an ancient Payan prophecy predicting The End of the World as We Know It if the bad guys get their hands on those two treasures of the Palombian forest, and the protagonists are in for a wild ride.

You can watch the trailer here.

HOUBA! On the Trail of the Marsupilami provides examples of: