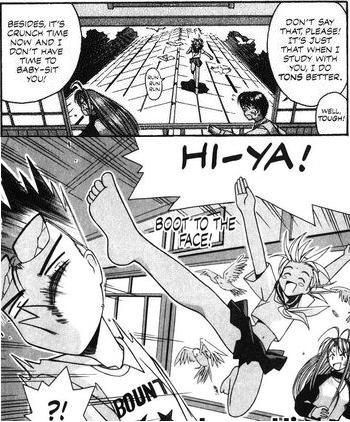 Eat your heart out, Kool-Aid Man.
Therkla: Elan, I left the door open for you, you know.
Elan: Right, that's why I had to go around and find another way to crash dramatically into the scene.
— The Order of the Stick
Advertisement:

Something's going on in the plot, and it's not good. Maybe there's a dramatic confrontation, maybe your best bud is losing a fight, but whatever the case, you need to get in there, fast, dramatically, and — *THUMPCRASH!*

All of you, listen up! For these cases, you need the Dynamic Entry!

The most common form is a diving kick from off screen, usually directed mostly horizontally, hitting whoever happens to be on-screen at the time. Most of the time, it's not clear how exactly they launched themselves thusly. Often suggests a Large Ham or some-such (in which case the Dynamic Entry indicates an Incoming Ham as well). May overlap with Big Damn Heroes.

Contrast Diving Save. The "Hey, You!" Haymaker is a subtrope of this. See Your Door Was Open for the not-dynamic-but-just-as-sudden-or-unexplained entry. Sometimes combined with There Was a Door or Super Window Jump, for when the Dynamic Entry comes through a wall or window to increase the surprise factor. Can overlap with Attack Hello.

If the entry kills someone, it is probably a Surprisingly Sudden Death. If somebody else throws you, then it's a Fastball Special. If you need a rope, it's Fast-Roping. It's almost always a key part of a Big Damn Heroes moment, and frequently a Big Entrance.

Compare Chandler's Law. See also Stealth Hi/Bye and *Click* Hello which are equally surprising but not immediately violent. In the Back can be used this way if the attacker isn't seen until he strikes.

This should not be confused with Feet-First Introduction.

...Can someone check and see if that first guy's okay?

Vyvyan makes his first appearance by smashing through the kitchen wall carrying a severed leg as the other three are eating dinner.

Vyvyan makes his first appearance by smashing through the kitchen wall carrying a severed leg as the other three are eating dinner.