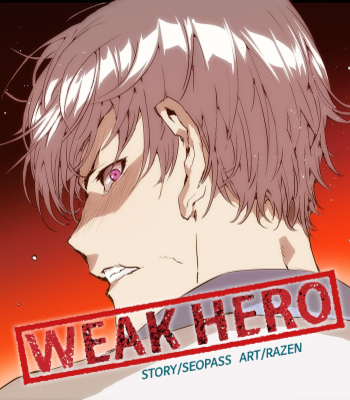 Weak Hero is an action webcomic written by Seopass and drawn by Razen. It's hosted on Naver

, with the translated version available on Webtoons here

Eunjang High School is ruled by tyrants: the delinquents at the top of the hierarchy prey on the weak as their favourite form of entertainment. The Union, a collection of vicious fighters, rules the Yeongdeungpo area with an iron fist. The adults are oblivious, and other students turn a blind eye out of fear that they may be next. For those without the strength to protect themselves, high school is a living hell.

Enter Gray Yeon, an exemplary student who ended up in Eunjang after a traumatic incident during middle school. Though weak in stature, Gray is a cunning fighter, employing brutal and calculative tactics to surprise and overwhelm his opponents. Along with Ben Park, one of the school's strongest fighters, and a slowly growing camaraderie of friends, Gray must fight his way up the rankings as the Union scramble to take him down.

While fighting is core to the series, equal focus is given to the developing friendship between Gray and the group of delinquents he finds himself in. Many of them have had a rough past, and it's through their trust in each other that they're able to overcome their trauma and develop into better people.