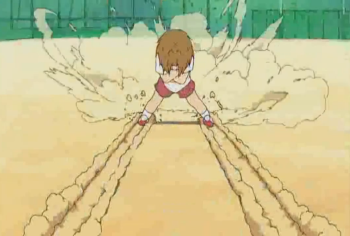 When you get hit, don't fall down! Slide back!
Advertisement:

When two characters fight, sometimes a character will get hit hard enough that they should be Punched Across the Room or otherwise thrown clear through the air... but instead, they will brace for impact, take the hit, and sliiide backwards on their feet, carving or ripping trails in the ground (and kicking up plenty of dust) as they do so, until they come to a stop. Bonus points if they also reach one hand down to the ground for extra grip.

Improbable as this may be for a character to get forced backwards without getting flipped over in the process, damn, it sure looks cool! And any character with enough badassery can pull it off.

A similar phenomenon can happen in Video Games specifically when a character blocks their opponent's attack with a Defend Command — it pushes them back, but without them losing their guard, taking (much) damage, or actually getting knocked off their feet in the process.