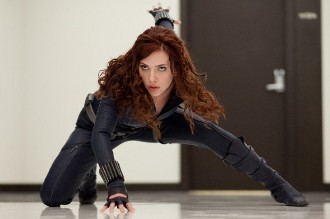 A popular visual trope often associated with martial arts. After performing a particularly cool move, or dropping from a great height, the character lands on the ground, feet wide apart and supporting their weight with one hand on the floor while the other hand is outstretched away from their body, usually pointed diagonally upwards. Extra coolness points are added if the hand on the floor is a fist that actually causes damage to the ground you land on.

A common variation of this features a head snap, where the character will land looking downward and after a brief pause, suddenly look up just in time for something to blow up behind them, and/or sending a badass Death Glare to the enemy up front, or a Kubrick Stare for the camera.

Can also be a result not of landing, but being knocked back by an enemy (likely one possessing Super Strength). In this case, you can expect some grooves in the ground from braking.

Very common in manga, anime, and video games, but can also be seen in movies — especially those with visual styles inspired by them. It has become especially popular in superhero movies (as noted in the page quote), owing to the fact that it's a pretty simple bit of special effects trickery that both demonstrates that someone is a badass and lets the filmmakers easily cover up the Stunt Double, especially in the version where the character is looking down upon landing before looking up at the camera (often with a cut in between).

A play on "three-point landing", an aircraft landing in which both the main gear (the wheels further back on tricycle gear aircraft like airliners) and the tail/nosewheel touch down on the runway at the same time, which is not a good thing for tricycle-gear planes due to the nosewheel not being designed to take that sort of stressnote the main gear are meant to take the initial shock before the nose is brought down, though it’s usually not a big deal for taildraggers (and is actually preferred for some of them)note and naval aircraft meant to land on an aircraft carrier are specifically designed to land like this, as there's not enough space on a carrier deck to allow for a gentle rear-wheels-first landing. Also not to be confused with the skydiving three-point landing, where you land on your feet and then fall on your ass.note Not as bad as it sounds, and a common way of teaching people how to land without hurting themselves: Feet hit the ground first, then immediately transfer the force of the landing to other parts of your body by falling over in a controlled fashion, letting your hips take the hit instead of your weaker ankles and knees.

Woooo! Superhero landing. You know that's really hard on your knees. Totally impractical, they all do it.

Ironman arriving at his expo and giving an entrance only he could give. Epic.

Ironman arriving at his expo and giving an entrance only he could give. Epic.