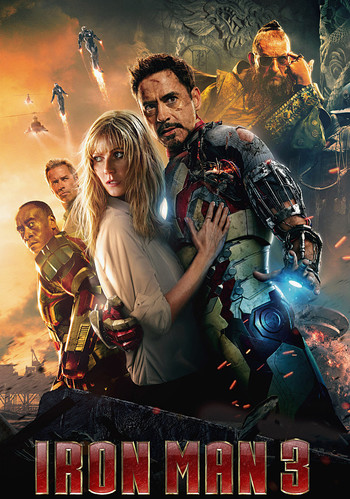 "A famous man once said, 'We create our own demons.'"
"You know who I am. You don't know where I am. And you'll never see me coming."
— The Mandarin
Advertisement:

Iron Man 3 is the 2013 sequel to Iron Man 2 and the seventh film in the Marvel Studios produced and Walt Disney Studios Motion Pictures distributed note The Paramount logo appears instead of Disney's, but unlike in the previous two Iron Man movies they didn't distribute it; like with The Avengers, they got it through Executive Meddling Marvel Cinematic Universe, and the first installment of its Phase 2. Directed by Shane Black (Lethal Weapon, Kiss Kiss Bang Bang) with a screenplay by himself and Drew Pearce, the film adapts elements of the "Extremis" story arc by Warren Ellis, the "Sentient Armor" arc by Joe Quesada, the "Five Nightmares" arc by Matt Fraction, and the origin story of the recurring Iron Man villain The Mandarin. Jon Favreau, who directed the first two films, serves as executive producer along with Kevin Feige.

When an enemy from the past targets that which industrialist Tony Stark holds most dear, he must rely on his ingenuity to protect those closest to him. Still haunted by the events from the Battle of Manhattan, he must confront challenges from not only this old adversary but from himself as well, and finally answer a question which has plagued him from the beginning: Is he the one who defines the Iron Man suit? Or is it the suit that defines him?

Further, a collection of tie-ins were released, which includes:

While no additional films in the Iron Man franchise have been made, Tony Stark's story would continue in further Marvel Cinematic Universe films, beginning with Avengers: Age of Ultron, while the story of the Mandarin would be continued in the short All Hail the King and the film Shang-Chi and the Legend of the Ten Rings.

You can watch the first

"You can take away my house, all my tricks and toys. But one thing you can't take away? I am Iron Man."
Feedback