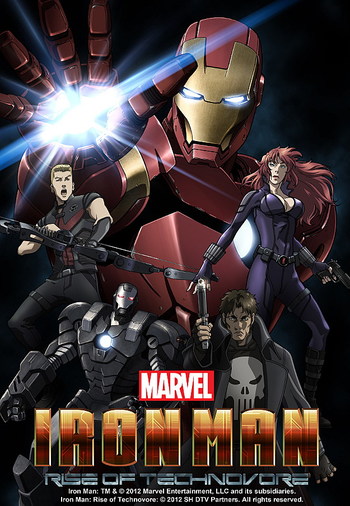 Iron Man: Rise of Technovore is a 2013 Anime film produced in collaboration by Sony Pictures Entertainment and Japanese animation studio Madhouse, who previously handled the Marvel Anime line. Based on the venerable Iron Man comic book franchise, the film sees Tony Stark on the run from S.H.I.E.L.D. after he is framed for a terrorist attack by Ezekiel Stane, the son of his deceased former nemesis Obadiah Stane. The movie features appearances from Iron Man's partner War Machine, as well as Hawkeye, Black Widow, Nick Fury, and The Punisher.

The film was released as a tie-in to the live-action Iron Man 3, and as such takes some inspiration from the Marvel Cinematic Universe.