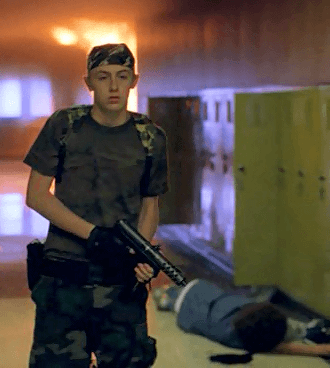 "They say, 'All teenagers scare the living shit out of me
They could care less as long as someone'll bleed'"
— My Chemical Romance, "Teenagers"
Advertisement:

In their striving to try to be taken seriously, teenagers are susceptible, gullible, and downright dangerous to anyone who wants to manipulate them. They are the best targets for demons, vampires, or The Virus. Sometimes they're just delinquents with no respect, sometimes they are only a hair's breadth of sanity away from shooting up the place and they'll stay that way as long as you don't treat them like a kid.

Much of this trope is fueled by a distrust of teenagers by the adult population. Also, many parents of young children dread the day that their innocent little angels grow into back-talking, angst-ridden, hormone addled teenagers, which can sometimes even happen earlier than expected. However, television producers are often worried about offending the very lucrative 13-to-17-year-old market, so usually the heroes are also teens, or at least there will be a very prominent "good" one.

Ironically, the much milder version of this trope occurs with shows aimed toward younger children who find teenagers cryptic, pushy, and intimidating for other reasons.

Some cases of Royal Brats and Military Brats can be attributed to this trope. This trope often has the teenage monsters in question have been previously sweet kids. If teen monsters run society, it's a Teenage Wasteland. See also Big Brother Bully, Kids Are Cruel, Humans Are Bastards, and Middle School Is Miserable.

Some teens act this way because they don't know any better. Some others however do, know they will get away with it because they won't get caught, and might have For the Evulz as their main motivation. Others may have been taught to act this way by their parents or are even dealing with their own huge troubles at home. Whatever the reasoning, the results are basically the same.

Of course, this can be — on an individual basis — Truth in Television (ask any high school or middle school teacher/student); there are monster teens in Real Life in the same fashion that we can find some mean kids and cruel adults. The mere fact of being a teenager doesn't make people automatically good or evil; it, contrary to popular belief, does not make any given person susceptible to reckless and selfish behavior. There are just as many, if not more, selfless, sweet teenagers as there are selfish, impulsive adults, and age does not necessarily correlate to behavior.

Compare and contrast Troubled Teen, a usually more sympathetic portrayal though one can develop to a monster.

In the beginning of Joker, a group of teens harass, steal from and beat up Arthur when he was just doing his job for no reason.

In the beginning of Joker, a group of teens harass, steal from and beat up Arthur when he was just doing his job for no reason.