Film / Village of the Giants 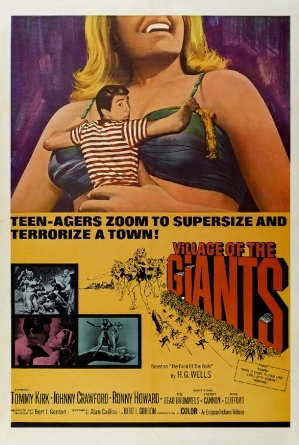 This 1965 Bert I. Gordon picture has young "Genius" (Ron Howard) tinkering with substances in his lab, creating a "goo" that causes whatever ingests it to grow to tremendous size. Unfortunately, some ne'er-do-wells blow in from out of town, and steal the goo and eat it, becoming the eponymous Giants. Now it's up to several teens as well as Genius to stop them.

Village of the Giants contains examples of the following tropes: