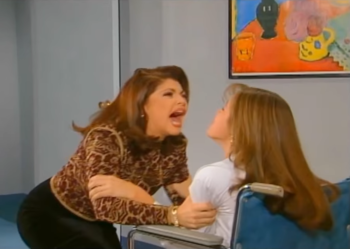 "Shut up, you damn cripple!"
Advertisement:

An easy way to make a character loathesome is to have them ostracize or tease someone with a (usually physical) disability. Most bullies wouldn't mock someone for having a disability — it's seen as too mean to mock someone who is "helpless" or someone who has an issue they have no control over — so only the most cruel characters do. Usually only younger characters act this way, however adults and even parents are also known to.

Compare to Bury Your Disabled and Abandon the Disabled. Sub-trope to Kick the Dog and Moral Event Horizon. May be a reason for the disabled character Hiding the Handicap. Also compare to its approximate counterpart Disability as an Excuse for Jerkassery.