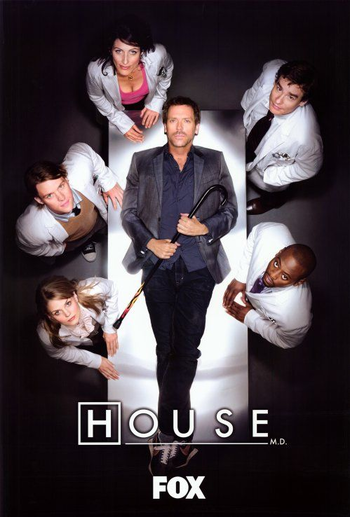 House (also known as House, M.D.) is a Medical Drama which aired on FOX from 2004 to 2012. Created by David Shore, it centers around Dr. Gregory House, a genius diagnostician and Deadpan Snarker at Princeton-Plainsboro Teaching Hospital.

House suffers from chronic pain in his right leg. He copes with it by using a cane and taking a lot of Vicodin pills. House is only interested in unusual medical cases and while he is abrasive socially, professionally, and personally, he is so good at diagnosing patients that the Dean of Medicine, Dr. Lisa Cuddy, allows him to continue. His best (and, really, only true) friend is Dr. James Wilson, head of the Oncology (Cancer) department. Being a modern-day homage to Sherlock Holmes, House and Wilson correspond to Holmes and Watson, respectively.

Each episode is a medical procedural. A patient suffers unexplained, potentially deadly symptoms which worsen dramatically. House begins the case by having a brainstorming session with his crack team of doctors: Eric Foremannote not that one, Allison Cameron and Robert Chase. They come up with possible causes while House makes snide remarks and mocks their suggestions. They diagnose the disease incorrectly for the majority of the episode, subjecting the patient to a wide variety of tests that may or may not be ethically sound. Finally, the real problem is found via "Eureka!" Moment. The solutions are not always from House himself, and they range from the mundane to exceptionally rare, and the end result for the patient can be anywhere between an easy full recovery to a death sentence. The character development and personal interactions of House, his team, Wilson and Cuddy is the other major element of the show.

While House is ostensibly a physiologist rather than a psychoanalyst, his diagnoses benefit from him verbally pummeling his patient and their relatives or associates into revealing all the secrets they possess, such as abuse, sexual misbehavior, or drug addiction, one of which will prove instrumental in diagnosing their illness after House has ruined their life. While he has genuine medical reasons for doing what he does, in the course of finding the solution to the puzzle, he is shamelessly manipulative and dismissive of medical and legal ethics, and it is always left to interpretation how big of a jerk he is.