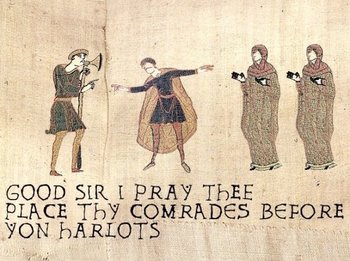 "Bros before hoes. I cannot stress this enough. Always remember, girlfriends come and go, but your boys are always there. Breaking this rule is to commit the cardinal sin against Team Testosterone."
— Barney Stinson, How I Met Your Mother

Your friend's pissed, lost and scared and just asked you for a lift but your girlfriend's telling you to blow him off. What do you do? Ditch her, of course.

This trope refers to the concept of putting friends before a romantic interest, with the idea that love is fleeting, but True Companions are forever. Although, this is ignoring the fact that friendships can also be fleeting and can have the same problems that romances could be plagued with.

A sub-trope of The Bro Code.

"Pals before gals" is the G rated version. "Mates before dates" is an Australian version. "Chicks before dicks" is picking up steam as the feminine version; "sisters before misters" or "Bows before bros" works too.

Compare with True Companions, Friend Versus Lover, and Two-Timing with the Bestie.

Nino wants to keep the girls uninvolved because he wants Adrien to have bro-time with the guys.

Nino wants to keep the girls uninvolved because he wants Adrien to have bro-time with the guys.