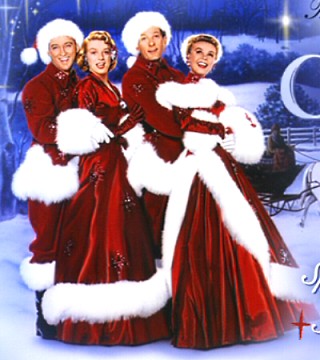 "...and may all your Christmases be white."
"We'll follow the old man wherever he wants to go
As long as he wants to go opposite to the foe.
We'll stay with the old man wherever he wants to stay
As long as he stays away from the battle's fray.
Because we love him, we love him,
Especially when he keeps us on the ball.
And we'll tell the kiddies we answered duty's call
With the grandest son of a soldier of them all!"
Advertisement:

Take Bing Crosby, Danny Kaye, Rosemary Clooney and Vera Ellen, mix in a bunch of Irving Berlin tunes, and throw in a light but solid plot to put them all together. This 1954 musical film directed by Michael Curtiz is what you end up with.

The two male leads play Bob Wallace and Phil Davis respectively, a mid-level entertainer and a nobody who meet up as they fight in World War II in the same unit. In the wake of an at-the-front Christmas show thrown as a farewell to their respected leader, General Waverly, Phil saves Bob's life, taking a minor injury in the process.

Phil — himself a wannabe entertainer — uses both Bob's gratitude and his guilt over the injury to convince him to try a partnership after the war. Despite Bob's initial misgivings, the pair not only work as a duo, they become one of the biggest acts in the country, moving in ten years from club gigs to their own radio show and ultimately to writing and producing their own Broadway revues.

A few days before Christmas on tour in Florida with the show, they receive a letter from Benny Haynes, another soldier from their old army unit, asking them to look at his sisters' nightclub act. It later turns out one of the sisters faked the letter, and the other sister is shocked at the dishonesty. It works, though, and Wallace and Davis actually end up falling for the sisters (but not willing to admit it yet), and even follow them to their new gig in Vermont.

Yet Vermont is struck with a warm spell. Even though it's the beginning of winter it's 70 degrees and there's no snow in sight. The owner of the lodge hires them anyway, and he turns out to be the now-retired General Waverly. Wallace and Davis decide to do test shows at the lodge to help attendance, and their relationship with the Haynes sisters starts to blossom further.

Okay, that doesn't seem like much, but that's not the point. Aside from the musical numbers, the film keeps a strong focus on both the growing relationships between the male and female leads, and just as strong a focus on how Waverly feels washed up after leaving the army, and how Wallace and Davis manage to lift his spirits on Christmas Eve.

The film may seem odd to some, especially how Danny Kaye's socially awkward character seems Ambiguously Gay to some these days (he's more meant to be a big kid, as indicated by his voice cracking at awkward moments). A Screen-to-Stage Adaptation hit Broadway in 2008 and has since become popular with amateur and community theaters during the holiday season.

For the trope about snow at Christmastime, see Dreaming of a White Christmas.