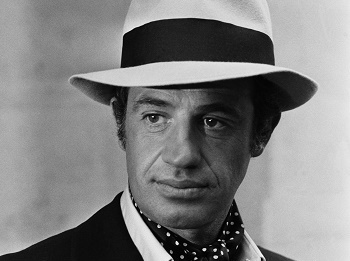 "I would say I've done everything I wanted to."
Advertisement:

The son of sculptor Paul Belmondo, he started a boxing career before shifting to acting. His rise to national and international stardom came with French New Wave vehicles such as Jean-Luc Godard's Breathless and Pierrot le Fou as well as dramas such as Jean-Pierre Melville's Léon Morin, Priest, Magnet of Doom and Henri Verneuil's A Monkey in Winter. He would remain a very successful leading man in French cinema throughout The '60s, The '70s and The '80s and became one of the highest-grossing actors of all time at the French box office, only equaled by the likes of Alain Delon (his longtime friend), Louis de Funès or Gérard Depardieu.

His crowd-pleasing shift as soon as the early '60s and even moreso in the '70s was much to the chagrin of critics who held his New Wave/more auteurist roles in very high regard, but pleasing crowds was just what he loved doing. He most often played Anti Heroes in crime films or hammed it up as dashing Aces, Lovable Rogues, Casanovas, Cowboy Cops or any role falling in-between, usually with heavy stunt work (which he tended to perform himself). Such characters tended to be showy, very sarcastic and very quotable and made him the undisputed quintessential Action Hero of French cinema for over three decades.

His career slowly declined starting in the late 1980s. He won the César Award for Best Actor in 1989 for his role in Claude lelouch's Itinerary of a Spoiled Child, but didn't show up at the ceremony, treating it like a invokedConsolation Award. He suffered a brain-damaging stroke in 2001 and retired from acting, only returning for one last role on the big screen in 2009. He passed away at age 88 on September 6, 2021 and received a national homage at the Invalides in Paris.

He is often nicknamed "Bébel" in France.