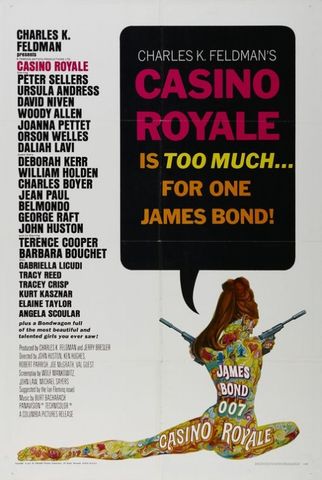 "...a definitive example of what can happen when everybody working on a film goes simultaneously berserk."
— Roger Ebert
Advertisement:

The one that's a complete parody.

The second adaptation (after the 1954 Climax! episode) of Ian Fleming's Casino Royale, released in 1967. It was originally planned to be a straight adaptation of the one novel that Eon Productions (at the time) didn't have the rights to, but producer Charles Feldman instead decided to mount it as spoof of James Bond and spy films in general. Unfortunately a Troubled Production ensued.

Sir James Bond (David Niven) is forced out of retirement to investigate the deaths and disappearances of various British Secret Service agents, which turn out to be the work of the spy organization SMERSH. Organizing the recruitment of a new team of agents, he also plans to confuse SMERSH by naming all of them "James Bond" — even the women. The film proceeds to jump back and forth between the misadventures of the faux-007s before most of them are brought together for the climax. They are:

The music was done by Burt Bacharach.

Eon Productions (owners of the main James Bond franchise) acquired the rights to the novel in 1999, and eventually produced a serious, faithful (and expanded) adaptation, which should not be confused with the 1967 spoof.