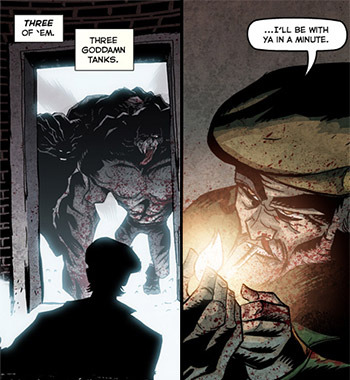 So you've got a character who's dying. They had a good run, and now that they're being let go you want a way to give them that one, perfect send-off that will cement them in the viewers' minds for the rest of the series to come. Not just a few words will do, but something defining to their character that can be done by their character.

What would be more fitting that to have them do the habit they've been doing all series long, but give this one the most flair? Usually the object in question will be just out of reach, leaving a nearby comrade to hand them the item of importance as a dramatic good bye. If no such comrade is nearby, it's Bittersweet Ending. If they're not mortally wounded and can still stand, there'll probably be a One Liner involved or even a smile.

This Trope is also traditionally used when a condemned person is about to be Shot at Dawn (offered by whoever is commanding the firing squad), in which case hope for survival (usually via rescue) still exists, as it functions as a small delay.

The object itself can manifest as many things: a book they were always reading ("Hmm, last page..."), a picture of a loved one ("At least I got to see your face..."), or some kind of music player with a simple tune to encourage the mood of the scene ("I always hated this song...").

Most often though, it's a cigarette, because Smoking Is Cool. This comes with the bonus of being able to see the character's final breath, and the added symbolism of the cigarette dying out. A character who has previously quit smoking may take this opportunity to smoke their Last Unsmoked Cigarette. The character's foe may even help them light it as part of a Dying Truce. Since smoking is especially infamous for the long-term health problems it causes, this can also imply that the character has accepted that such concerns are no longer relevant.

Clever heroes will often use this as a diversion by taking advantage of the villain's vain pity to escape certain doom. Naturally, this is listed on item 14 of The Evil Overlord List.

Under most cases, the character must be Killed Off for Real for the trope to be played straight. Examples involving the character's survival are a subversion. Compare with the much more time-friendly The Last Dance. See also Last Request.

As a Death Trope, SPOILERS AHOY!