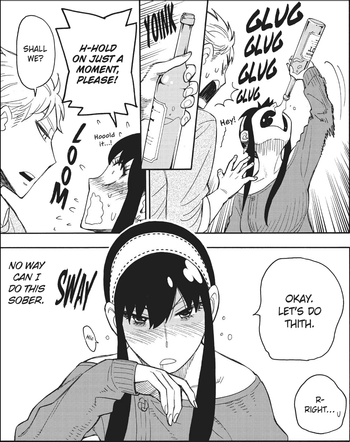 Robin Hood: [holding up a bottle of whiskey] What about this? Is this magical?
Regina: Not exactly. But it is a liquid that can conjure courage, give strength, or even act as a love potion of sorts. It's called whiskey, and no, it's not magical...especially the next day.
— Once Upon a Time
Advertisement:

The consumption of alcohol has many effects on a person, one of which is the lowering of inhibitions. It can make a person feel more confident in their abilities, eliminate self-consciousness and doubt, and just plain make things seem less frightening. As a result, some people will consume alcohol in a deliberate attempt to bolster their courage before doing something they consider scary or intimidating.

The fearsome event can be anything from relatively minor (giving a speech) to potentially embarrassing (getting naked on stage) to life-altering (proposing marriage) to life-threatening (actual combat); the key to this trope is that someone (usually the drinker) feels the anticipated event warrants the alcoholic aid. Occasionally, the booze is provided by someone else who thinks it will be helpful.

See subtrope But Liquor Is Quicker where the drinking is used specifically to prepare for sex-related activities. Compare Drunken Master (when drinking actually makes them stronger) and Booze-Based Buff (booze in a video game strengthens your player character in some way). The explanation of Bottled Heroic Resolve may not be that it actually gives the drinker extra strength, but this trope instead, overlapping with Magic Feather in the process.

This is probably one of the Oldest Ones in the Book; it's often called "Dutch courage" after an old synonym for gin (which originally came from the Netherlands) or, in humorous pseudo-intellectual fashion, "pot-valiancy".

Not to be confused with the Let's Play series of the same title.

open/close all folders
Anime and Manga
Comic Books
Fan Works
Films — Live-Action
Literature
"The answer didn’t sit right with me. I’d been on the streets long enough to see how well mead "improved" people’s skills. Pick your poison: beer, wine, vodka, whiskey. Folks claimed they needed it to get through the day. They called it 'liquid courage'. It made them funnier, smarter, more creative. ...Except it didn’t. It just made them less able to tell how unfunny and stupid they were acting."
Live-Action TV
Music
Tabletop Games
Theater
Video Games
Visual Novels
Web Comics
Western Animation
Real Life
Feedback

Example of:
Lactose Over Liquor