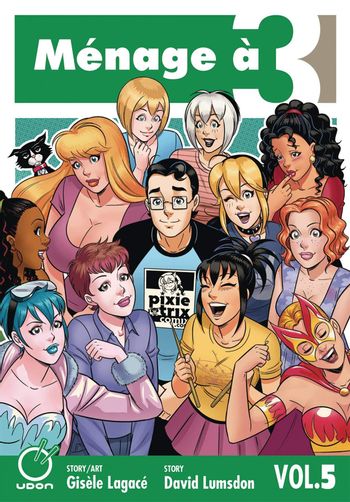 Yvan: I'll be honest, Gary. You seem to have quite the dating life.
Gary: Well ... it's mostly just a string of improbable-sounding coincidences —
Advertisement:

Ménage à 3 is a webcomic created and drawn by "Giz" (Gisèle Lagacé), and co-written by Giz and "Dave Zero1" (David Lumsdon). It ran from May 17, 2008 to April 9, 2019. Ménage à 3 centers around the life of Gary, Montreal resident and (initially) 29-year-old virgin. Upon losing his old roommates Matt and Dillon at short notice (when they decide to become an official gay couple), Gary is desperate to find a couple of new roomies to pay the rent.

Things change drastically for Gary when two girls, Zii and DiDi, suddenly start sharing his apartment. Zii, obviously perplexed by Gary's (unwanted) purity, declares that her goal is to make him more confident and help him lose his virginity. But life proves full of distractions for all three of them, as other characters and objectives come and go through the story.

The comic is a Roommate Com in Sex Comedy mode; hence it has a sitcom atmosphere overlaid with lewder-than-most jokes, with a touch of Slice of Life style at low-key moments. Almost all the main characters, males included, get their naked shots, and many of the storylines revolve around characters' sexuality or relationships. Men Act, Women Are is averted, and even inverted; the female characters may nearly all be Ms. Fanservice types, but they're generally proactive, whereas the male lead is a bit of a nebbish.

In short, it's Man About the House/Three's Company, just with more nakedness, and no Don Knotts (too much comedy of errors as it is—plus, this is 21st-century Montreal, so even the crankiest landlord is unlikely to object to shenanigans so long as they don't interfere with rent payments). Or, The 40-Year-Old Virgin in webcomic form. The writers themselves describe it as an "HBO-style rom com," which, if you take "HBO-style" to mean "unabashed nudity," is approximately accurate. Most of the characters embody various tropes familiar from American comics or Japanese manga, though sometimes with personal twists; see the Characters page for lists of identifiable tropes specific to individual cast members.

Incidentally, this is constructed as a very traditional four-panel strip (the western equivalent of a Yonkoma); there are always four panels, or occasionally some double panels. Originally, they appeared online as a single row of four, but since a major Website redesign in early 2020, they have been posted in a 2x2 layout. (As the print collections have always been printed with this 2x2 format, any double panels are always located in positions 1 and 2 or 3 and 4. Also, the very last strip is an exception, as it consists of a single double-width, double-height panel.) Likewise in the tradition of classic comic strips, the great majority of strips end with some kind of comedy punchline, despite the fact that there is a continuing story.

Even the first page is NSFW, but the site does include a warning about that

before it. The trope pages below should not have direct NSFW links.

Ménage a 3 generated two spinoffs during its run: Sticky Dilly Buns, featuring former side-characters Dillon, Amber, and Chanelle; and Sandra on the Rocks, featuring DiDi's ex-colleague Sandra. The authors eventually announced that the comic would end in 2019, and carried this through with a final strip on April 9th of that year. Several plot arcs were brought to a conclusion, with at times surprising amounts of Character Development, although some things were left hanging. On the day of the final strip's appearance, a sequel/spinoff comic, Pixie Trix Comix, was announced to start two days later, and this appeared as promised. Also, in 2021, a one-off print/PDF comic, Zii and the Troublemakers, continued the stories of some of the characters a little.