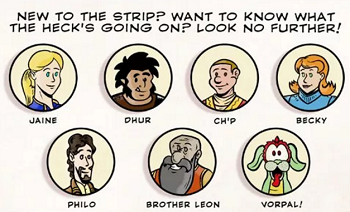 is a Sword and Sorcery, Dungeons & Dragons-style fantasy comic strip that updates Mondays, Wednesdays and Fridays. MeatShield centers on the adventures (or lack thereof) of Dhur, a mighty half-orc barbarian warrior, Ch'p, halfling monk and pastry chef extraordinaire, and Jaine, half-elven mistress of magic, music and sarcasm as they wander the world of Ardris.