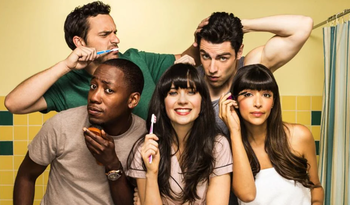 There are three to six young people living in an apartment (or separate apartments) in The City — either New York or the creator's hometown — usually abusing rent control, spending way more money on food and clothes than normal, going to work for about an hour a season, and talking endlessly about their relationships. At least one of them will be gay. At least one more will be in a crappy band. One of them may not be a roommate at all, but their Drop-In Landlord who's always around.

This trope seems to have peaked in the 1990s (thanks to the Follow the Leader trend of Friends and Seinfeld), but there are some influential earlier examples and the format has been popular ever since.

By far the largest subgenre of Slice of Life - especially in webcomics, where it tends to overlap with Two Gamers on a Couch and Journal Comics - and a formidable chunk of Sit Coms.

Compare to Dom Com, which usually stars people living in the suburbs in a later stage of life. Compare/contrast with Monster Roommate which is its sci-fi/fantasy counterpart. Can overlap with Roommate Drama, if a big part of the show is the clash between the roommates.