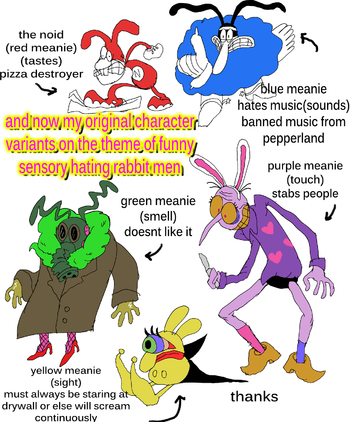 The first drawing of them all.

"in this world there is 5 gay idiots that share an apartment and nobody knows anything except theyre here and some magical fun times will take place in this funny world......The Meanies Comic
title pending i don't really care i will make shit up as i go along and retcon things if i feel like it uuuuu"
— the first page

, also known as Meanies Comic, is a webcomic created by grimharlequin that began on December 31, 2017. It bridges the gap between Blue Meanie from Yellow Submarine and The Noid, to create a species called "meanies", who each hate a particular sense (since The Noid hates pizza, and the Blue Meanie hates music).