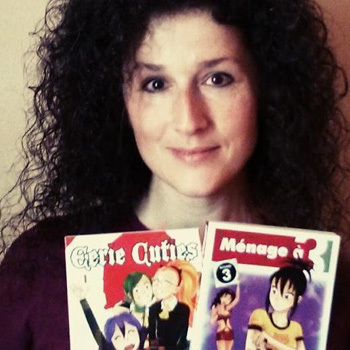 Gisèle Lagacé (born June 16, 1970), often known as "Giz", is a French-Canadian webcomic writer and artist who has worked on various titles, usually as the original creator or co-creator. She is part of the Pixie Trix Comix collective (after which one of her creations, Pixie Trix Comix, is named).
Advertisement:

Giz was also the bassist with early '90s rock band Barbarella, and has done some work as a traditional comics artist, such as for Archie Comics and on Jem and the Holograms (IDW). Her art style is often reminiscent of Archie Comics, which may be deliberate emulation or explain why she was hired by them, or both, though she sometimes also mixes in some Manga Effects.

Tropes associated with Giz's work include: