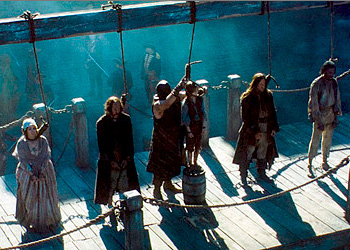 An early scene consisting of mature content used for works of fiction to let the audience know right off the bat that no, this ain't for kids. The R-Rated Opening is primarily for dealing with potential Public Medium Ignorance about genres that are traditionally associated with family-friendly material, or involve mature "twists" on iconic family-friendly genres/themes such as a Super Hero film from The Dark Age of Comic Books, that's based on a Darker and Edgier Deconstruction of your typical cape. Having someone get shot, die, curse, or even just bleed on screen will very clearly let audiences know to expect things to get much, much more serious and give fair warning for any parent who didn't pay attention to the R-rating but saw "cartoony people" in the movie trailer and thought they were taking their kids into some light-hearted fare.

Animated works trying to break out of the Animation Age Ghetto are a popular source for these. An R-Rated Opening can set the mood early by openly subverting standard conventions about the "heavy" material being well into the work and set the tone for the mature territory right where it should be. It can be combined with Mood Whiplash by starting out with a clichéd light-hearted scene the audience has seen a million times from the genre and completely dismembering it figuratively and literally.

Despite the trope name, the production in question does not actually have to have either an R, TV-MA or M rating, as examples of this can be found in PG and PG-13/TV-14/Teen-rated productions as well (such as the page image which is taken from a PG-13 movie).

The ad opens by swearing at the viewer, and it only gets more vulgar from here.

The ad opens by swearing at the viewer, and it only gets more vulgar from here.