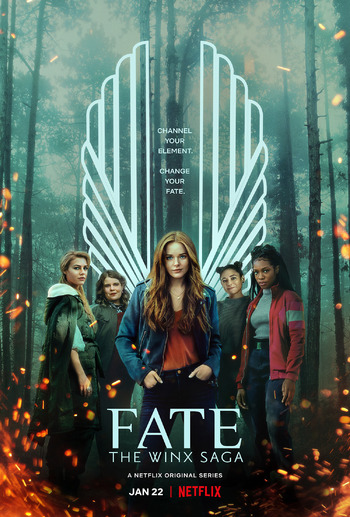 "Magic lives in a very fabric of nature." note Left to right: Stella, Terra, Bloom, Musa and Aisha.
"They deserve to know what I am."
— Bloom
Advertisement:

The series focuses on a young fire fairy named Bloom (Abigail Cowen), who travels from California to the Otherworld to enroll in Alfea, a prestigious boarding school where wingless fairies learn to master their powers – and where trainee warriors, known as "specialists", guard the realm from the feared "Burned Ones". It is all new to Bloom, but she has guidance from Alfea's imperious headteacher, Farah Dowling (Eve Best), and her four roommates: the tenacious water fairy Aisha (Precious Mustapha); the grounded and chatty earth fairy Terra Harvey (Eliot Salt); the mind fairy Musa (Elisha Applebaum), an empath who keeps her headphones on to block out other people's emotions; and Stella (Hannah van der Westhuysen), a snooty light fairy who also happens to be fairy royalty.

The series premiered worldwide on January 22, 2021, and the first season consists of six episodes. Nearly a month after its debut, Netflix renewed it for a second season, which will consist of eight episodes.