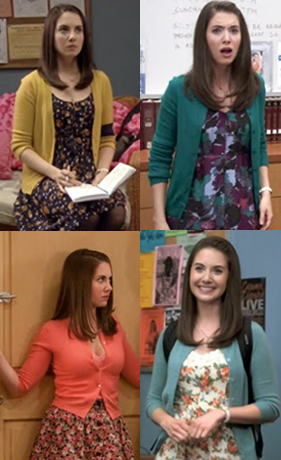 "Zoey...'Stammers too much.' 'Lacks confidence.' 'Wears too many sweaters over collared shirts.' Not sure how that one is quite performance-related..."
— Zoey Clarke, Zoey's Extraordinary Playlist
Advertisement:

This character always dresses a certain type of way.

We don't mean a uniform or a Limited Wardrobe — this character changes clothes quite frequently, probably to the point of an Unlimited Wardrobe — but all the outfits of their choosing seem like variations on a theme, to the point that the character has a signature sense of style. Maybe it's a certain color combination or pattern or a similar but overall consistent way of pairing tops and pants. Whatever style it is, unless it's a special occasion, they will dress this way 90% of the time.

Because Clothing Reflects Personality, this may signify something about a character. For example, a Girly Girl might dress exclusively in florals, a grizzled biker has a rotating stock of leather jackets, or a stoic businessman wears power suits everywhere. However, the real purpose of this trope is to help a character stand out from the rest of the cast through a unique visual style without resorting to dressing them in the same outfit every time. The audience then begins associating this look with the character.

In visual media, this is more common in live-action shows than in animated ones, as resource constraints often make it easier to give animated characters a Limited Wardrobe. On the other hand, live-action shows (especially those set in "our world"), have to keep their characters distinct even though they would realistically be changing clothes regularly. Describing a character's fashion sense can also be useful for visualizing characters in written media. In general, it can help distinguish a large Ensemble Cast or when one has characters who look similar.

Compare Iconic Outfit, when a character becomes associated with one outfit, and Iconic Item, which is about a single item. A long-lasting deviation from this is a Significant Wardrobe Shift, which goes hand-in-hand with change in the character. Not to be confused with Same Clothes, Different Year, which is when the exact same outfit is used in a flashback or a flash-forward so the audience can tell it's them. A Color-Coded Secret Identity may be involved.