Western Animation / As Told by Ginger 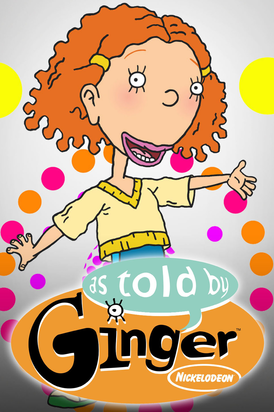 Someone once told me the grass was much greener, on the other side...
— The first and last lines from the show's opening credits
Advertisement:

This Nicktoon focuses on the life of junior-high-school student Ginger Foutley. She, along with her friends Dodie Bishop, Macie Lightfoot, and Darren Patterson all try to rise from the position of school geeks as they solve many conflicts that come their way. Luckily for Ginger, the most popular girl in school, Courtney Gripling, has taken a liking to her, and often includes her in her social plans. She is intrigued by her (what Courtney calls them) 'Gingerisms'. However, Miranda Killgallen, Courtney's right hand woman, makes sure that she is not bumped down from her position thanks to Ginger.

At home, Ginger records her lively adventures in her diary. Her little brother, Carl, is often scheming with Hoodsey Bishop in his own side plots; and her mother, Lois, is always there for advice, which Ginger is always open to listen to. The series takes place in the fictional town of Sheltered Shrubs, located in Connecticut.

It ran for about 4 years from 2000 to 2004 (with the finale being released on DVD and a couple of the episodes leading up to the finale being left unaired in the US, although one of these episodes aired on Nicktoons in 2006, and four more of them aired on TeenNick's The Splat block in October 2016). In January 2021, the series was added to CBS All Access, where the last episode of the originally unaired bundle was finally released.

It was among the Nickelodeon cartoons that were ahead of their time, featuring (relatively) realistic situations and teenage issues which soon set a mark for the future titles to come in the TeenNick time slot. The most notable among the show pointed out that it didn't follow the Limited Wardrobe trope compared to the other Nick titles. It is also one of the first shows, not just on Nickelodeon, but perhaps in all of children's entertainment, to portray interracial romance in a serious (and positive) light.